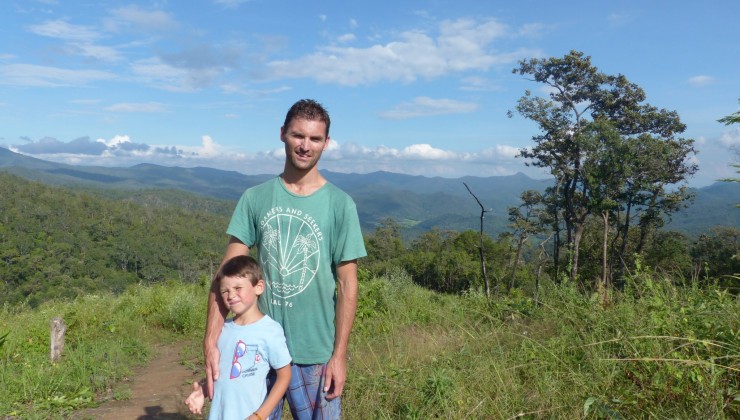 Chiang Mai being the hotspot of trekking in Thailand we knew that we wanted to go on a multi day tour. Private tours are typically 5-10 times as expensive as joining a group tour and being on a budget we opted for the group version. But what to do 2 days 1 night, 3 days 2 nights, North of Chiang Mai or South of Chiang Mai. Lots of tours and places to choose from. After spending roughly half a day asking different tour agencies and people we settled on a 2 days 1 night tour, in the area South of Chiang Mai – which turned out to be a good choice.

We bought the tour through “Super Panda Tours” on the main road of Chiang Mai; the lady who runs the place has been doing it for 25 years and was really helpful and friendly and gave great advice in terms of what would be the best fit for us (we thought we would do a 3 day, 2 night but she talked us out of it since it would be too much for Noah and Vitus). She is just a standard tour agency but most are not even able to tell you what is in the brochures they display…

Line is sick so only Noah and Jesper end up going

As you may have noticed in our post about being sick Line got sick in the morning and she had to stay at home with Vitus. Jesper and Noah took of and after the disappointment of only being two had passed spirits were high and the weather good. We stopped a at local market and we bought some banana, biscuits, candy and raincoats (dark clouds were starting to form in the distance). It seemed like a great group with people from all over the world (France, Australia, Argentina, Norway, 2 x Brazil and Poland) but our hope that somebody old or overweight would join to keep the pace down was not fulfilled 🙂

Put in short we would have been happier without it. The elephants were not treated well and the explanation we got was that they had been imported from Burma where they had been used for logging and so needed some pretty harsh training – not our cup of tee and rumors have it that some of those claiming to be “saved” from logging in Burma are actually caught wild in Burma and smuggled across the border . Also we passed several places where the locals were using streams as their personal dumpster. Only upside (at least if you ask Noah) was the fact that the elephant decided it needed a shower when walking through the river so it kept filling the trunk with water and spraying it on all of us. 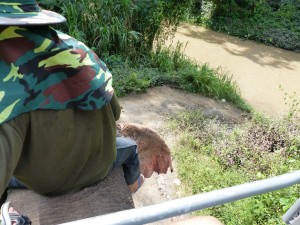 Literally 2 min. before we were supposed to get out of the car to start the first trek the first raindrops started to hit the front window and by the time we got to the drop-off it was a a first class tropical shower. Noahs first response was a “I hope we are not going to have to wait to long before it stops so we can start” – naturally assuming that no right minded person would voluntarily get out in something like this. But when he saw Jesper starting to put on the back-pack’s rain cover he quickly got the picture. First he looked like a big question mark but it quickly turned into a big smile. We brought rain-coats so we were prepared 🙂

Walking the down the first track was like walking in a small stream. But manageable and Noah quickly got the hang of it and celebrated the fact that he was not the slowest in the group. The rain stopped after about an hour just when we reached the first waterfall which was 3 times its normal size due to the heavy rain. We had lunch there and raced sticks down the stream (Noah won fair and square 8 to 3) – our guide Poh introduced Noah to the concept of a slingshot and it took Noah all of 2 min. to make Jesper promise that he would get his own when we got back to Chiang Mai. 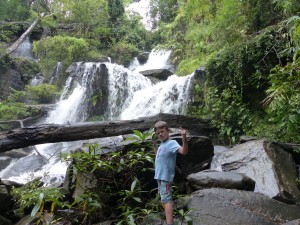 After a nice Lunch of fried rice with chicken packed in (and eaten from) leaves. It was a good 1,5 hour trek uphill to the village. On the way we passed some very small farms and were offered fresh long-beans and passion fruit – both tasted really good. At this point Noah was starting to get a bit tired after a total of 2,5 hours of trekking but he made it the whole way without assistance and he was very much aware of the fact that he was faster than the couple from Brazil 🙂 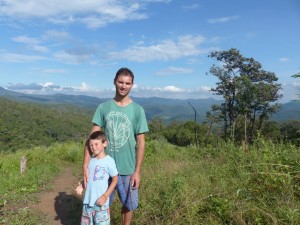 Was a pleasant surprise in many ways. They are not isolated and though there is no electricity they have both cars and motorbikes. Walking around the village we were afraid it would be a “zoo like” experience but it was very casual and if anything Noah was the “animal” being looked at 🙂

Dinner was fantastic and Noah met a girl exactly his age (also born July 2010) and though they could not speak they had great fun together. Especially when the bonfire was lit and they found lots and lots and lots and lots of grass, sticks, leaves they could burn. Most of it pretty wet 🙂 Caught with a cell phone camera the pictures are not great but still easy to tell that Noah is not the most photogenic of the two: 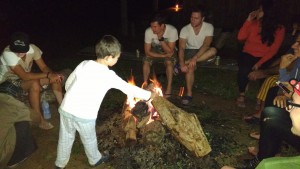 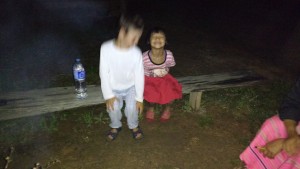 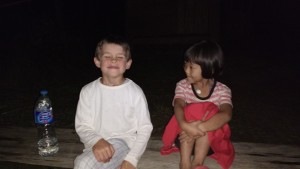 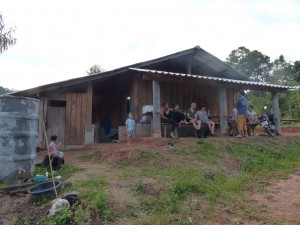 Noah was tired and went to bed around 20.30. 10 minutes after 4 women from the tribe came by and wanted to see the white boy. It was really hard making them understand that he was sleeping and had Jesper not insisted they would have walked right into the hut and pointed strong flashlights right into his face. Only when they were promised they would see him in the morning did they agree not to and went back to their huts – no doubt who was “the animals in the zoo” 🙂 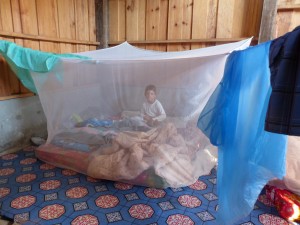 A bit later a 64 year old guy from the hill tribe showed up and joined us around the bonfire. He had lost his wife a few years ago and any dictionary should have a picture of him under the term “extrovert” – he had specialised in various gimmicks and magic tricks with sticks, rope and bottles and though his english was very limited he managed to get all of us to become stand-ins in his show and he kept going for at least 2 hours insisting on “more, more, more”, “come, come, come”. A real personality and as an added bonus he insisted on teaching us all the tricks he went through. 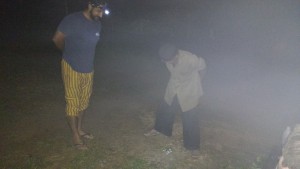 “Unfortunately” everyone had had a few beers and “other stuff” at this point so none of us could remember much of the details the day after.

Noah unfortunately got sick in the morning and threw up for a couple of hours. Fortunately we were off to a very late start and it was almost 11 before we had all packed our stuff and set out for the first trek. Despite having no breakfast and throwing up what was left of his dinner, he still managed to trek the 1,5 hours to the waterfall and the following 1 hour to the bamboo rafting. No complaints and no arguing – tough little guy. 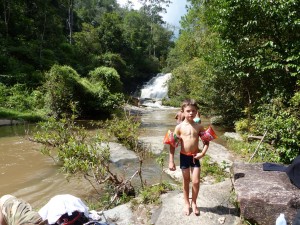 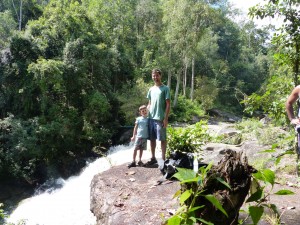 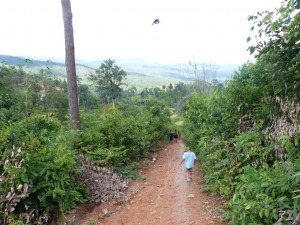 Being a very warm second day and forgetting Noah’s cap the guide quickly made a hat for Noah which looked very cool and he had to pose with it on several photos with members from our group. 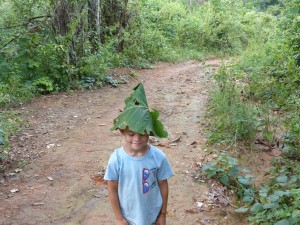 While bamboo rafting on the river Kwai in Kanchanaburi was quite a disappointment it was great this time. With a bumpy road and several small falls (very small but with some “white” water in places ) it was really fun and beautiful and Noah kept repeating “Bamboo rafting is very, very, very cool” and “Look dad” – he is really getting much better at English and new sentences are starting to form all the time. 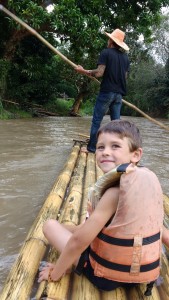 The tour was a great experience and we will sure do it again if we get to Chiang Mai again, so we all can go and hopefully be healthy. Had Line and Vitus been able to go it would have been very tough since Jesper would have had to cary him 95 percent of the way. It would have been possible but though the tour to the South of Chiang Mai is not as hard as the Northern it is still many hours of trekking and the trail does get quite difficult and steep in some places.