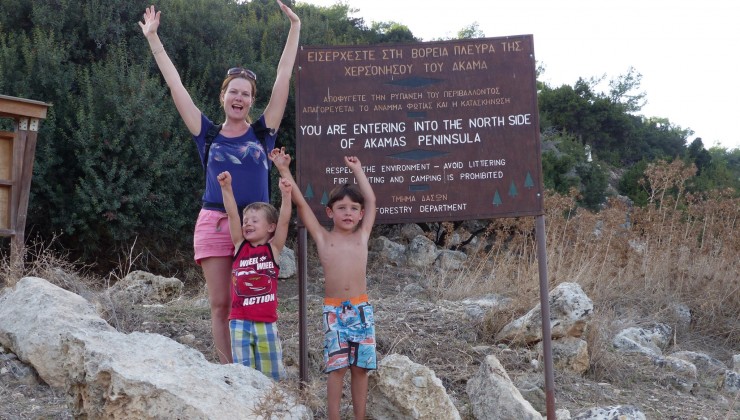 Originally we wanted to spend the day on a 7,5 km hike in the mountains around an hour away, but it was simply too hot (32 degrees), so we chose to spend the day at a beach (again) . We found a local very small beach by the fancy hotels in town. The kids played in the sand, and we went swimming and snorkeling and had a good time even though the beach and the sea bottom weren’t that nice. But apparently our kids had a little too much fun for a russian guy, who came and tried to take a nap besides us on the beach. We were playing a game where we drew something in the sand, which the waves erased, and the kids were laughing loudly and scolding the waves. He simply came over and asked us to “make the boys” quiet down, because he, and some old people lying further away weren’t able to sleep?! ok then. It was too hot anyway and we had been there for 4 hours, so we left shortly after, even though Jesper got irritated with the guy and would have liked to stay longer.

The highlight of the day at the beach was that Noah and Jesper saw a small octopus when they were snorkeling. Not the most spectacular day, but still OK. Also a reminder that we are not beach people and spending a day at the beach with little else to see and discover than sand is just not us – no matter the weather.

In the evening, Jesper and Noah went to see the caves again, Vitus didn’t want to go, so Line and Vitus stayed in the apartment to relax and cook dinner. Later Vitus changed his mind and when Line told him it was too late he replied “you just stay here mom and I will catch up with them on my own”. A typical example of Vitus not quite accepting that he is 3 and would not even make it out of the front door without getting lost.

Noah and Jesper found a huge cave, that we had missed on our first trip to the old caves i Paphos. The absolute highlight of Noah’s day. 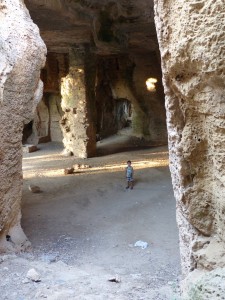 Today we wanted to do something besides going to the beach to avoid kids and adults getting bored to death. We all like to hike, so we drove to Latsi towards the tip of the Akamas peninsula to take the “Aphrodite nature trail”. The route is 7,5 kilometres long and turned out to be quite hard with lots of steep uphill sections. 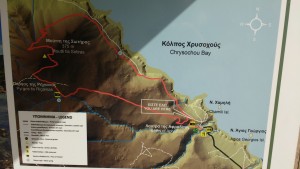 The trail began at the Baths of Aphrodite, which is a small pond with a running spring, which Aphrodite supposedly used for bathing. Nice, but nothing speciel and we would have been pretty disappointed had we come here just to see this. 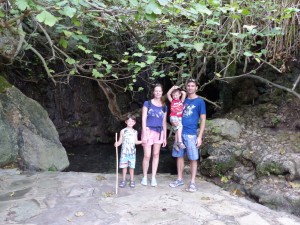 After this we walked up a very rocky and (so we thought at the time) quite steep trail. In the beginning, Noah didn’t want to walk at all, which is very unlike him, but for the time being it is sometimes like travelling with an angry teenager. But when we convinced him he should walk in front to find the way and help mom up the cliffs, his spirit changed 180 degrees, and from there on, he hiked the 7,5 kilometres without complaining. 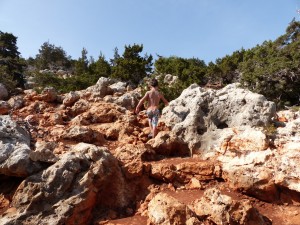 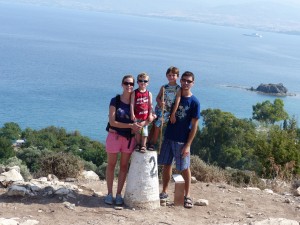 We walked for about 1,5 hours until we came to a resting place with a 500 year old oak tree in the middle. It was the perfect time and place for lunch! we had brought some bread, canned tuna, canned “leverpostej” (danish paté), mayonnaise and crisps – but had forgotten to bring a plate and a knife to make the sandwiches. Everyone was hungry, so we had to improvise using Line’s legs as the plate and Jesper’s Flying Blue frequent flyer card as a knife to spred the mayonnaise and leverpostej. It worked like a charm and the kids ended up sitting in the old oak tree eating crisps. 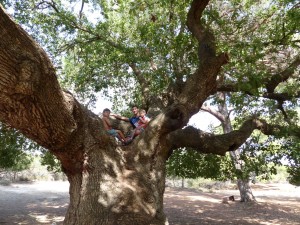 After lunch, we continued uphill, but somehow thought we had almost reached the top. But this was not the case. The trail just kept climbing and the views of the bay just kept getting better. They were breathtaking! 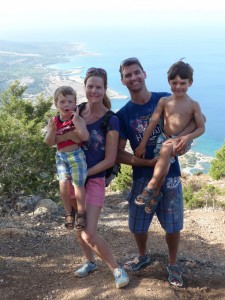 After a short rest at the top of the mountain with spectacular views, we started the descent. And this was where it got real tricky. The paths got really steep, really slippery because of a lot of loose rocks and gravel, lots os hairpin turns and no fence and the mountain side was really steep. We took a child by the hand each and held on really tight as we hiked down the mountain. Lines fear of hights was really put to the test, but somehow the goal (getting down safely) overcame her fear, as we had to focus 100 percent on the trail to avoid slipping in the gravel and rocks. 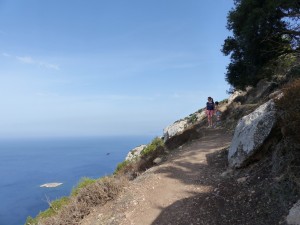 Vitus walked all the way down by Jesper’s hand, because it was simply to dangerous to carry him down the descent. 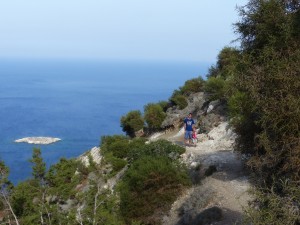 He was very proud of this and we found it a great achievement by a 3 year old. We took a victory picture at the bottom of the trail of the boys and Line yelling We Did It! 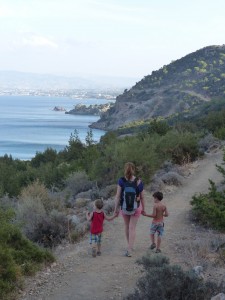 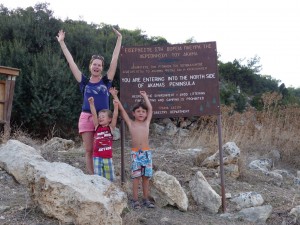 When we got down from the mountain, we treated ourselves to some homemade ice cream, which was being sold by the entrance of the trail. Oh My God! it was the best ice cream we have ever had – not at all what we had expected in the middle of nowhere:-)

The hike was very tough, but it is by far our best experience in Cyprus so far. We are just not into going to the beach every day.

On our way back, we stopped at the beach in Latsi to have a swimm. It was 5 PM, so we just made it before the sun set. Right in front of us in the bay, we saw the largest and most extravagant yacht we have ever seen. It had a whole garage in the back with speed boats and jetskis in it and a helipad on the deck. It just had the letter “A” on it, and as we googled it when we got back, we found that it belongs to a russian billionaire and has a cost of 300 million US$! we took photos of it and if you are interested, you can click this link to watch a short BBC clip about the yacht 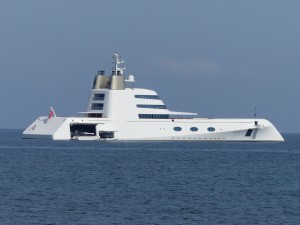 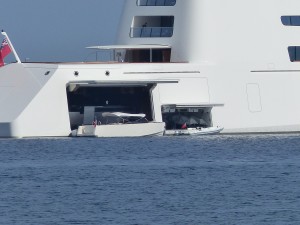 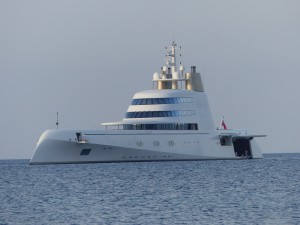 We sure hope that the russian billionaire wasn’t looking out his large windows, because Vitus had to “go” all of a sudden, and didn’t make it to the toilet:-( so like a dog, we had to clean up after him – not nice. Luckily this has never happened before and we were the only people on the beach, and it is unlikely that we will run into the few people who might have been watching from the cafe nearby again. 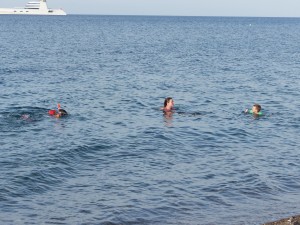 Vitus fell asleep in the car and slept all the way back to the apartment in Paphos.