After Noah’s birthday, we decided it was time for some more adventurous stuff again. So we drove to the Atherton Tablelands – a huge and beautiful area in the mountains near Cairns. There are a lot of hairpin turns on the way, especially the first 45 minutes or so from Cairns, but luckily the boys have gotten really good at driving without getting carsick, so it went really well. The weather has been pretty unstable during our days in Queensland, so it shifted from being almost sunny to grey and misty and rainy.

On the way up to the Tablelands the weather was good, and we made some short stops on the way to enjoy the view. 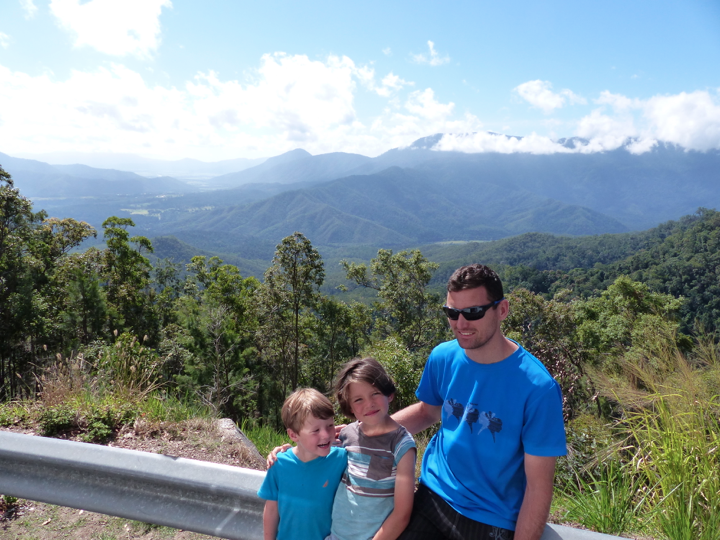 The first place we visited was the beautiful Lake Eacham. 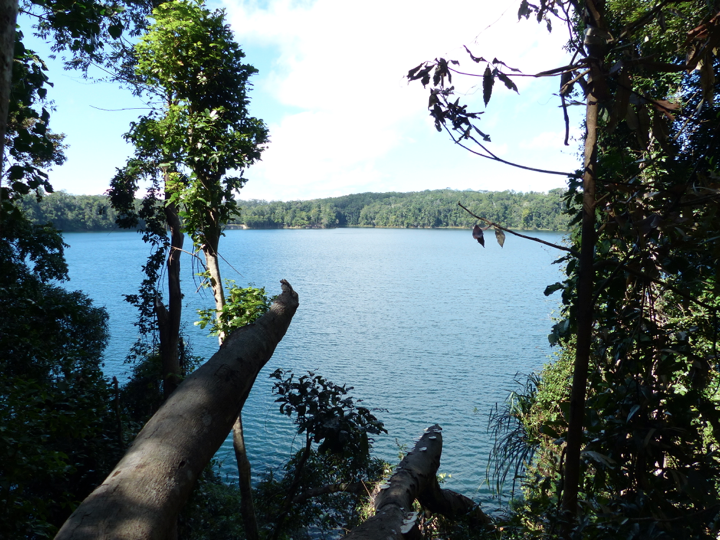 There is a nice walk around the lake (3 Km) which we did before lunch. Along the way, there are many signs with information about the flora and fauna in the area and also about the area’s aboriginal history and significance. We did not see many animals on the way, probably because we have Vitus, who is not exactly quiet. This isn’t all bad, though, since he also scares away snakes and possibly crocodiles:-) 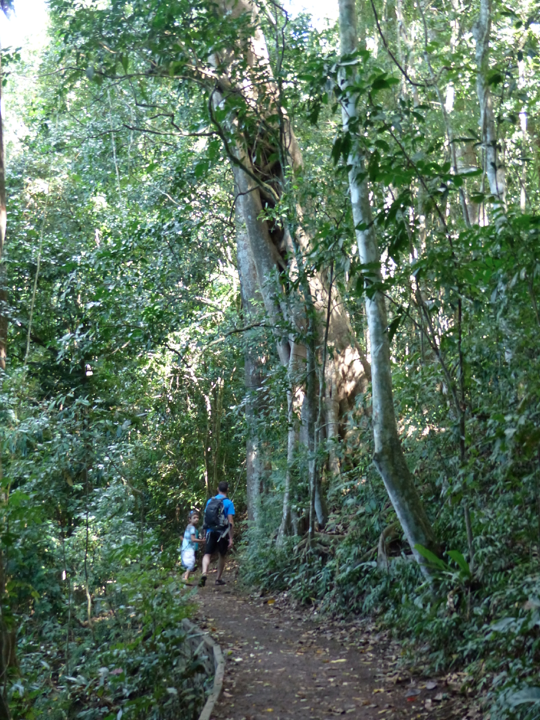 There is also a rather big fig tree right next to the track.

Wish we had trees like that to climb back home 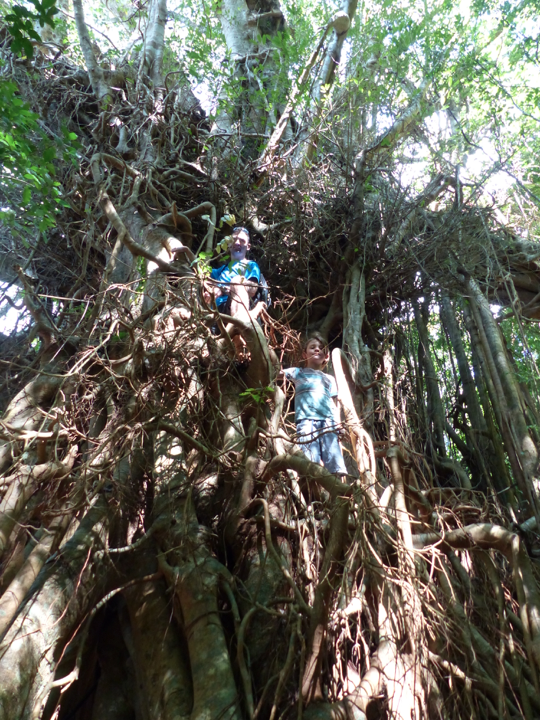 We had lunch by the lake and Jesper and the boys went for a swim while Line stayed in the sun – she had gotten a cold from the boys and was not feeling well enough to go into the cool water. 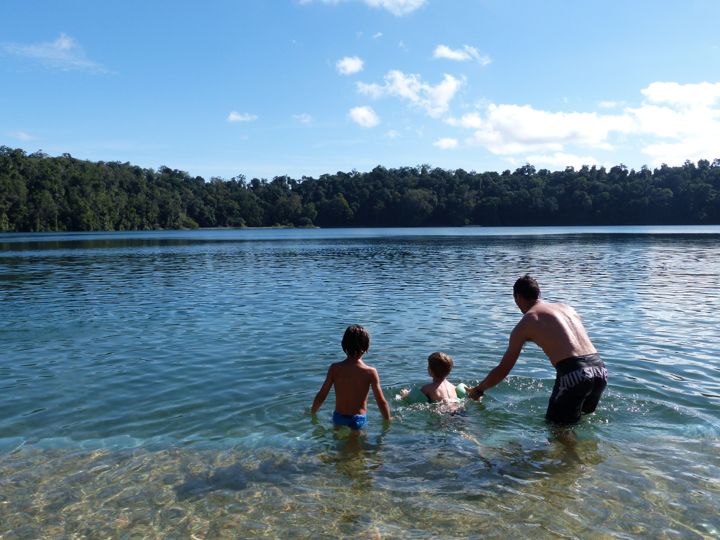 After Lake Eacham, we went to see a famous and huge Curtain Fig tree close by. These fig trees are living on other trees which they use for support and eventually kill. This particular fig tree has eaten up 3 other trees and is truly enormous. 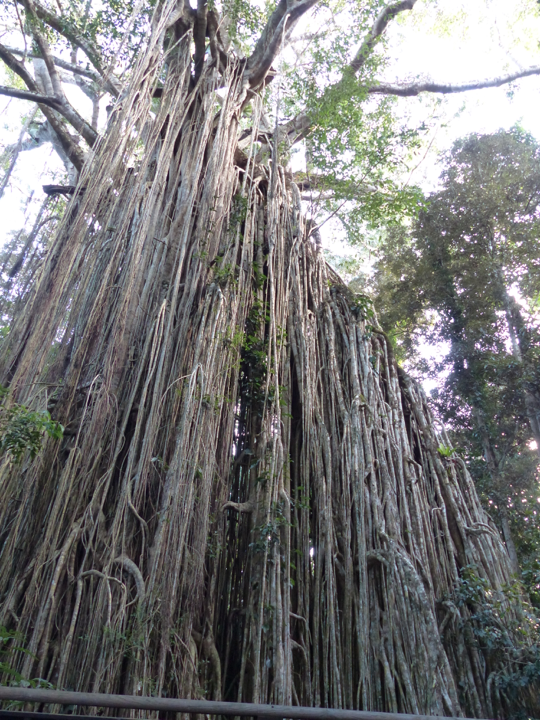 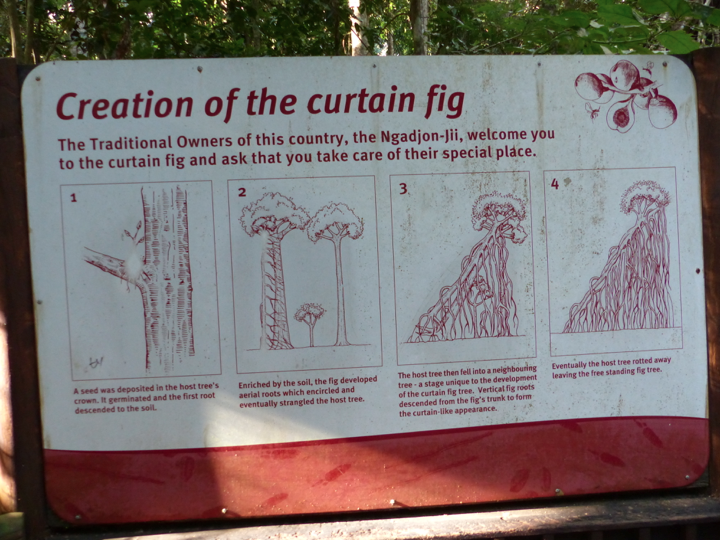 Afterwards we went to a creek in the area, Peterson Creek in Yungaburra, where it is possible to spot the elusive Platypus. There is a short walk along the creek, and shortly after entering the walk we met a lady, who said that she had just been lucky enough to see one, and pointed us in that direction. We went there and shortly after we saw the cutest little platypus popping up to the surface in a part of the creek that wasn’t full of weeds. 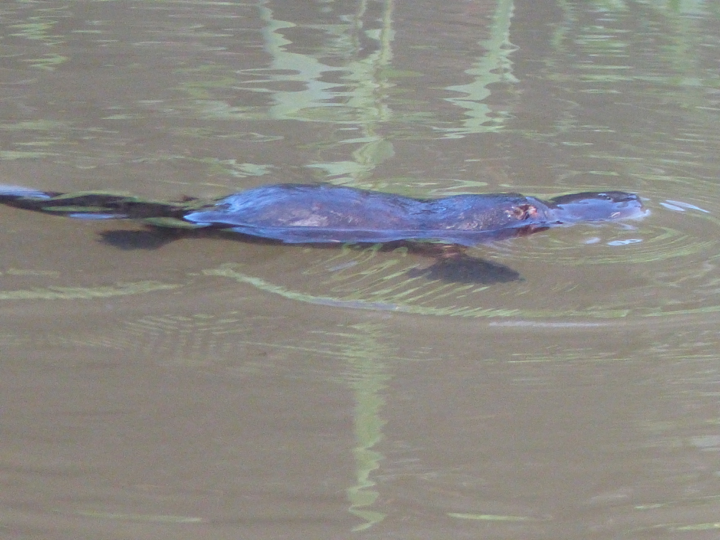 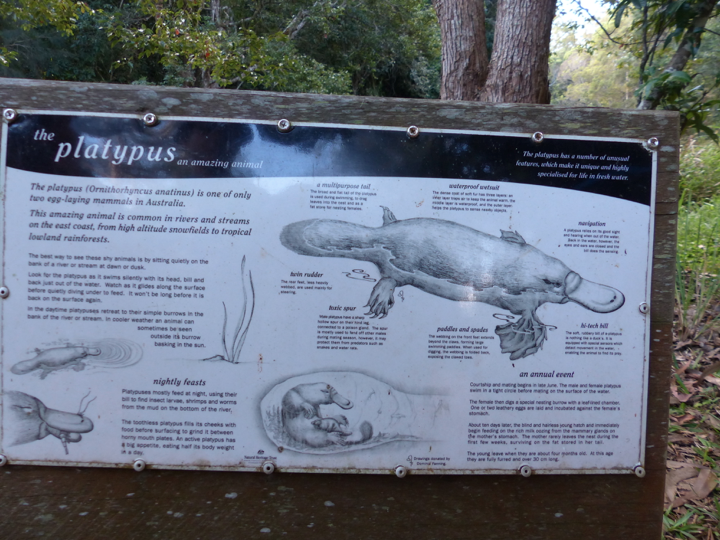 We took a walk along the creek afterwards and met lots of people, who had not seen a Platypus, and we did not see any more of them. So we felt very fortunate to have seen this little creature for the first time.

We went back to Lake Eacham and decided to renegade camp there after having dinner at the barbecue area there since it was dark and late. We woke up to the most beautiful view, had our breakfast by the lake and a morning swim. An excellent way to start the day. 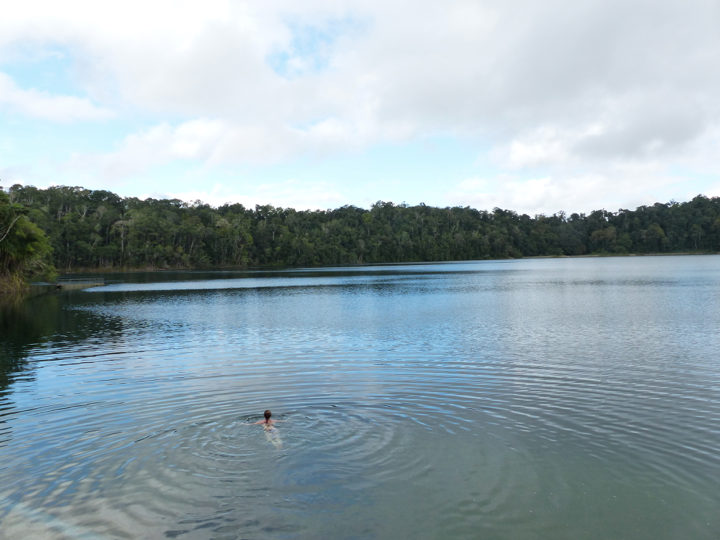 Line insisted that we should go and see an outdoor museum in Herberton to learn more about the mining history of the area and also how people used to live here, from the first settlers to around 1950. The boys (including Jesper) found it moderately interesting, while Line enjoyed some background information about Australia. 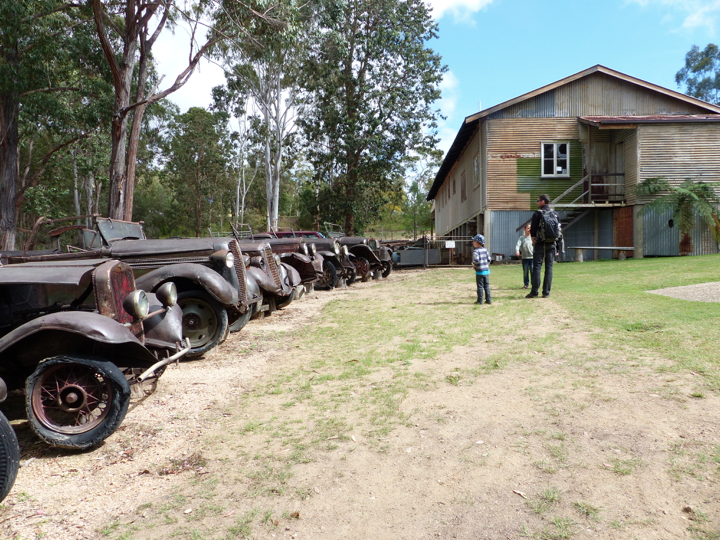 We saw a blacksmith working, which the boys found particularly interesting and Noah kept talking about it. 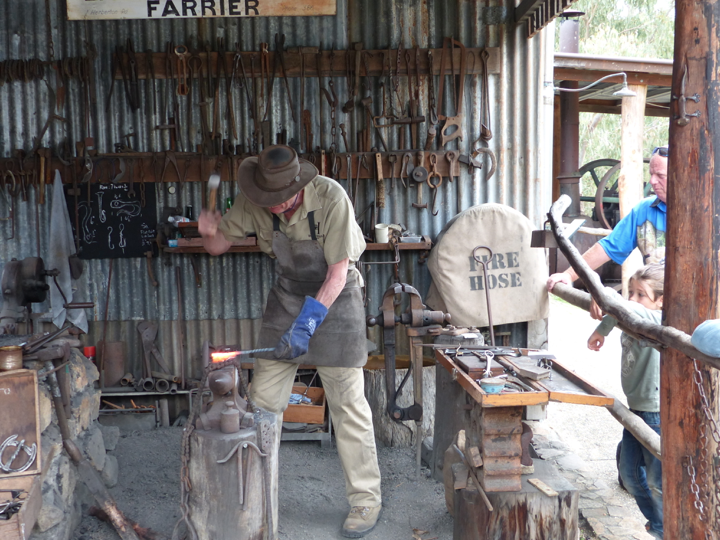 After around 3,5 hours of education, we went to visit a small mining museum in Herberton, since the area used to be one of the best spots for tin mining. The boys did not have a very lon attention span anymore this day, though, (which they always show by starting to wrestle each other)so it was a short visit. We did try to wash tin, which they found interesting. Jesper would have made a very good tin washer, and managed to wash lots of small tin grains free from sand and rubble. 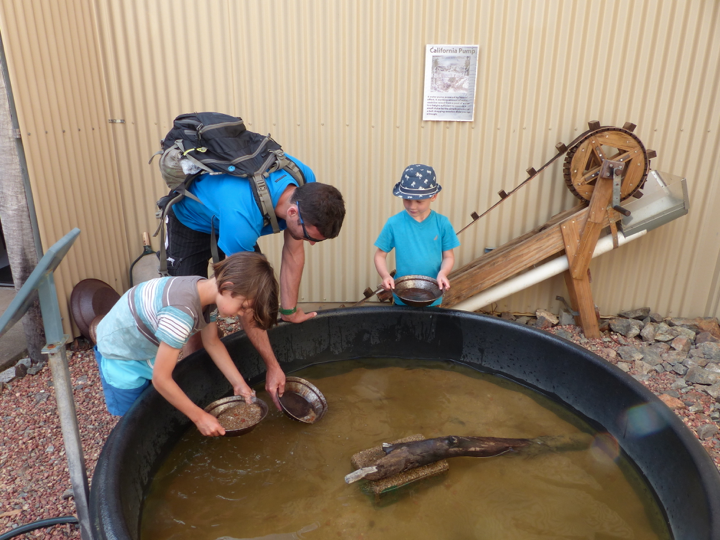 We ended the day by visiting one of the beautiful waterfalls in the Tablelands, Dinner Falls, and Crater lookout. The way there could have been a short 30 minute drive and it is a mere 400 meter from the main road. Unfortunately we trusted google-maps a bit too much and ended up on a dirt road that led nowhere. It also included a few steep parts where we lost traction a few times and with deep holes Jesper could finally breath normally when we were back on the sealed road without crashing. Unfortunately we were too stressed to remember taking a picture before it was almost over 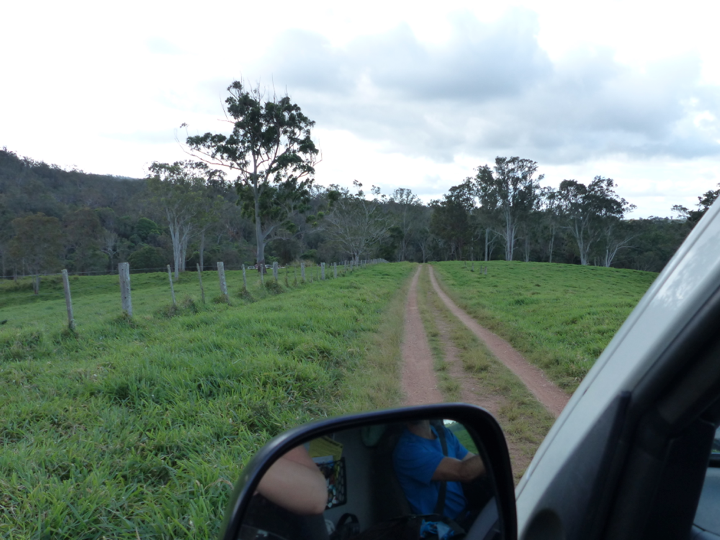 Once there after more than an hour, it was however worth it: 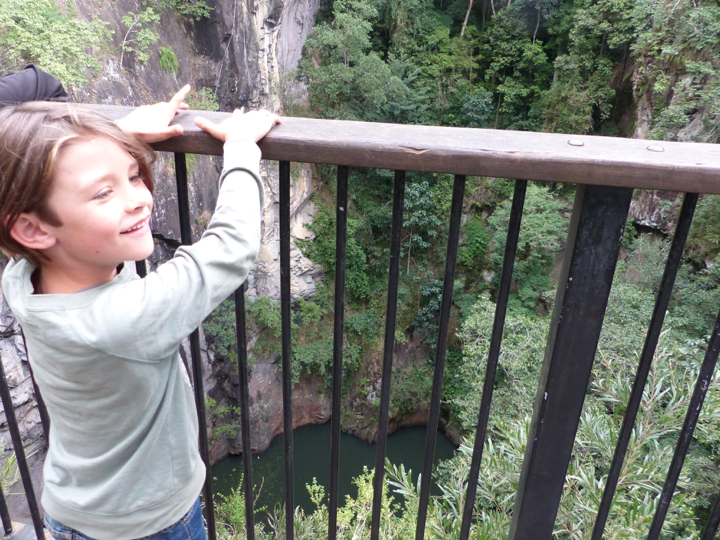 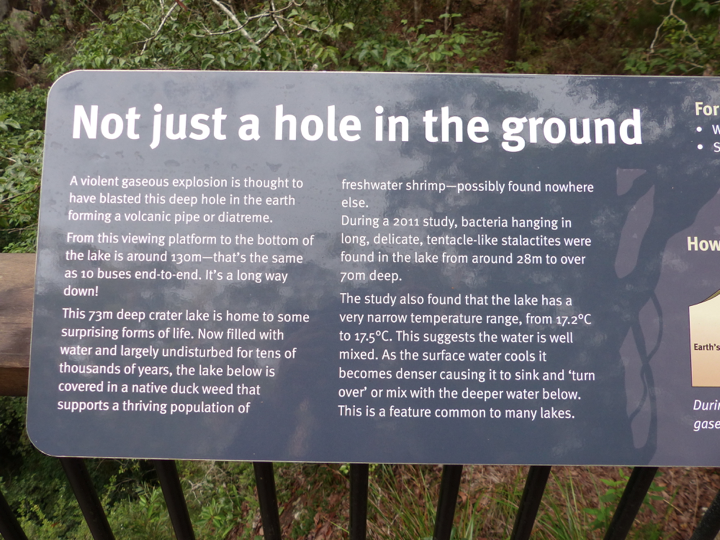 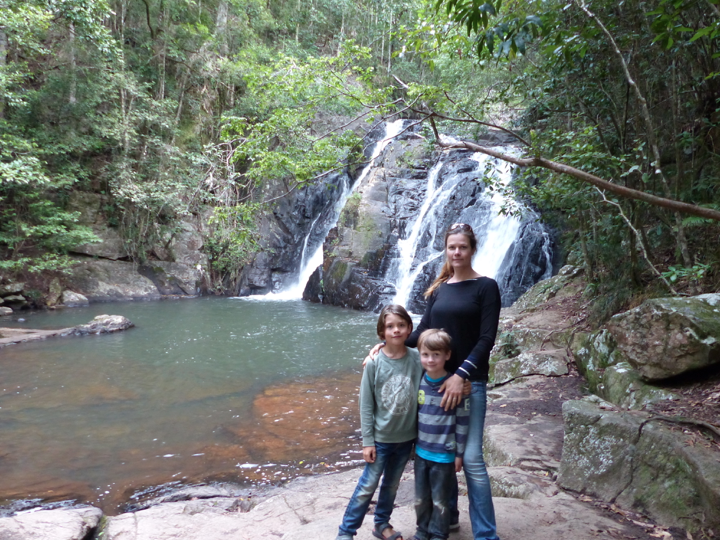 It was raining and too cold to go swimming in the falls, unfortunately, but we did see a Cassowary near the trail on our way back to the parking lot. 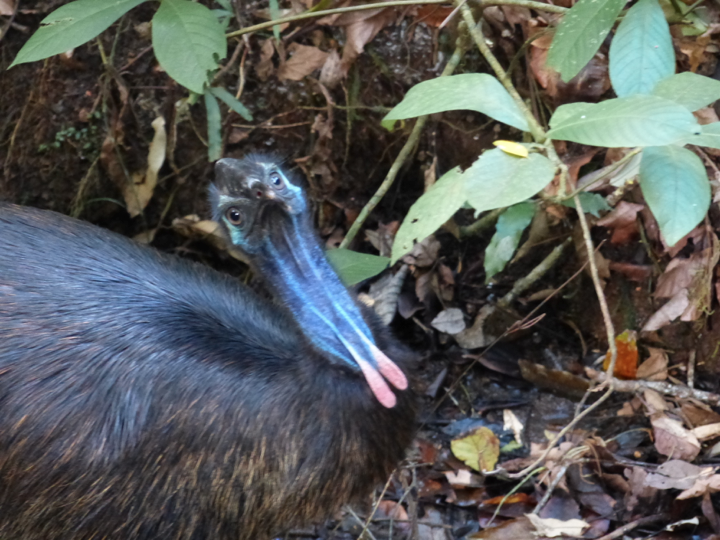 The next day we drove to the Millaa Millaa waterfall, one of the most famous and photographed waterfalls in the Tablelands region – it is the picture perfect waterfall. We did get a couple of glimpses of the sun while we were there, and Jesper and the boys went for a swim. 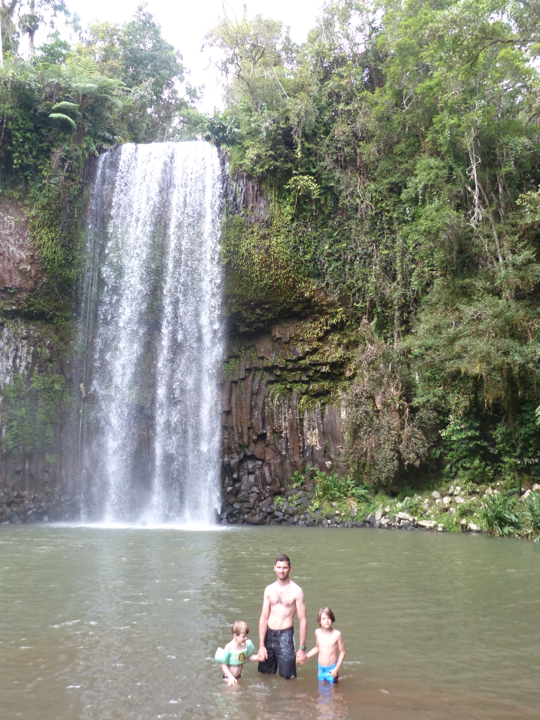 Afterwards it started raining even more and we had to skip one of the best lookouts in the area, since it was too foggy to see anything. All in all a really nice couple of days with mixed weather in the Atherton Tablelands.