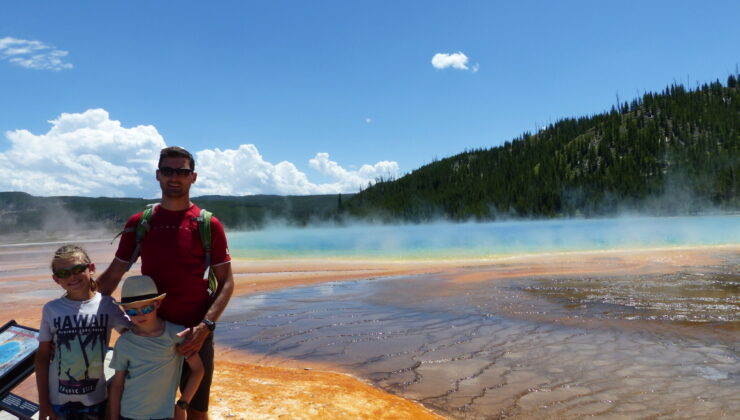 After Cody it was time to go to Yellowstone. Being as hyped as it is we were mentally preparing ourselves for a minor disappointment. Boy, were we wrong!! Yellowstone is anything and everything you expect from one of the world’s most popular national parks. And one blog is simply not enough to cover all the great views, hikes, swims and animal sightings that we experienced during our almost 5 days in the park. But isn’t it too touristy you might ask? – in some ways yes. You should prepare yourself for some traffic jams and difficulty finding a parking space next to the most popular attractions, but even though we visited in the very peak of the high season it was not close to spoiling the natural wonders of the park. 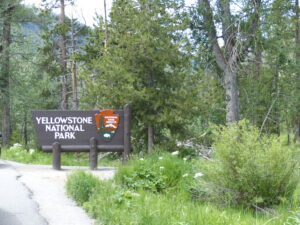 After a short picnic next to a beautiful lake we drove further into the park. 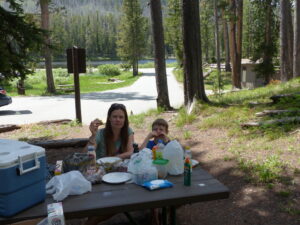 About half an hour later we saw the first line of cars next to the road and about 15 people taking pictures. We pulled in and were pointed in the direction of a brown lump in the grass next to a tree trunk about 70 meters from the road. Our first Grizzly!! For the first few minutes we could only see an ear and the back but fortunately in turned its head for a better view. 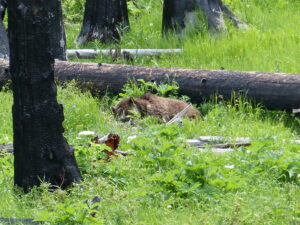 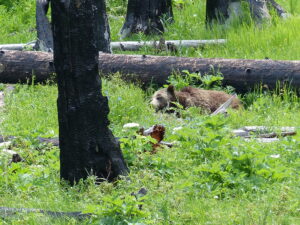 Bears are dangerous but at a distance they are great to view and we made sure to carry bear spray (small canister that will stun the bear for about 2 hours if you spray its face when it attacks) with us whenever we were outside the car. In general we found that the bears in Yellowstone just ignored us and all the rest of the tourists – but more on that later.

With that great experience to start our Yellowstone adventure we drove on. Not wanting to chance the “first come, first serve” nature of the campgrounds inside Yellowstone in peak season we had booked 5 nights at the Koa Campground outside the city of West Yellowstone. Wanting to get there in reasonable time for dinner we took the right turn onto the Grand Loop (a loop covering 80% of the highlights in Yellowstone) after passing “fishing bridge”.

After a short drive we got our first view of the Yellowstone river, the boiling hot springs and a heard of Bison on the bank. 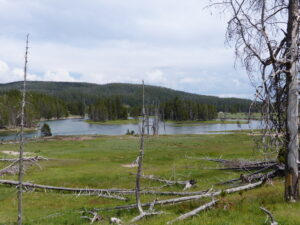 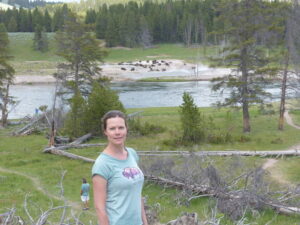 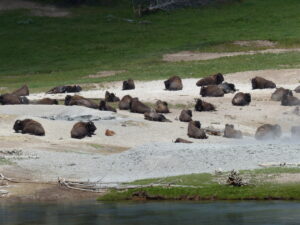 You find yourself wanting to stop every 50 meters when a new viewpoint comes up and suddenly a Bison was walking right next to the road just 3 meters from the car. 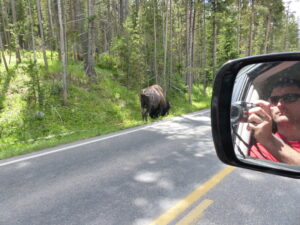 Our first real stop was at the Mudvolcano where we got to see the first hotsprings and of course the mudvolcano up close. Being in Yellowstone naturally 2 giant Bison bulls were walking right next to the boardwalk 🙂 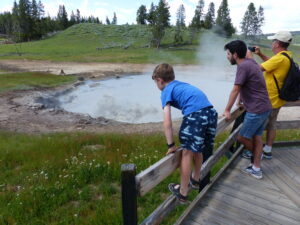 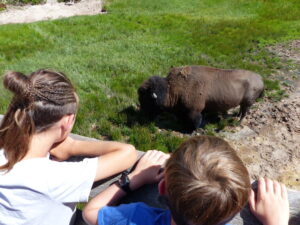 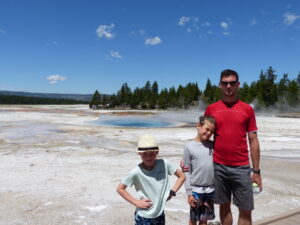 You would think that too dangerous but rangers were right by making sure that everybody kept their distance.

There were plenty of other sights on the way to West Yellowstone but already it was getting late so we headed straight for the campground where we got the first chance to setup the Slackline. 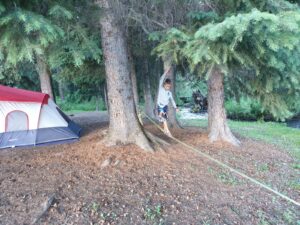 We dedicated our second day at Yellowstone to hot springs and Geysers. Half of the world’s Geysers are located in the park so there is so much to see. The highlights of the day were the Grand Prismatic spring and the upper Geyser basin.

With all the colours Grand Prismatic Spring is often used as Yellowstones signature photo and seing it up close was no disappointment. Interestingly most of the colours in the Yellowstone hot springs are not from mineral deposits but bacteria mats suited to different temperatures. 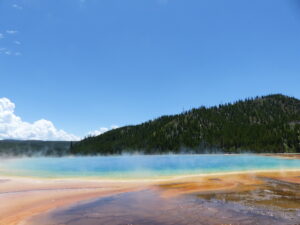 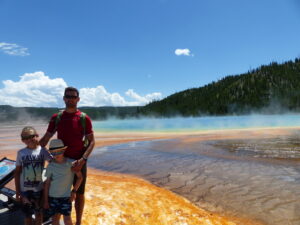 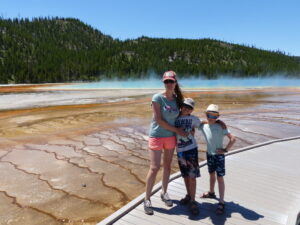 Old Faithful in the upper Geyser Basin is the most famous Geyser in Yellowstone, since it erupts almost exactly every 90 minutes and at least 500 people were present to see it erupt when we were there. 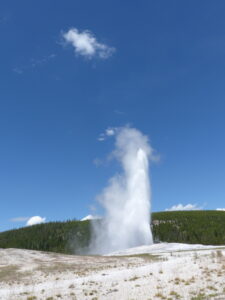 It was OK but the highlight was Grand Geyser – the tallest predictable Geyser in the world. Luckily for us it had chosen to be very unpredictable that day. It was set to erupt at 2.45 pm, but when we got there at 3.30 pm nothing had happened. We waited for around 10 minutes and then decided to continue. On the way back at 4.30 people were still waiting and we headed on. 500 meters on Jesper to a last look back before it disappeared from view and saw the first yet of water in the air. Line and Vitus where tired and decided to watch from a distance while Jesper and Noah ran back to watch (Grand Geyser erupts for around 9-12 minutes). Being much closer to Grand Geyser than Old Faithful and with a much more powerful eruption it was truly an amazing sight. 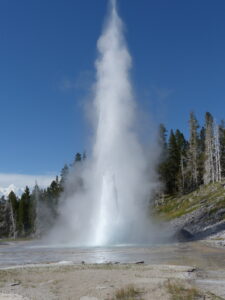 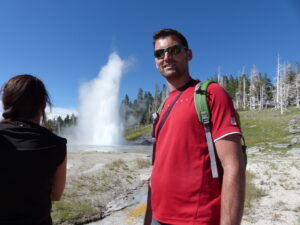 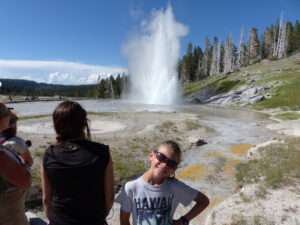 We saw a lot more Geysers (though not erupting) and hot springs that day, but too name them all would make this already long post way to long so we will leave you with some of the pictures. 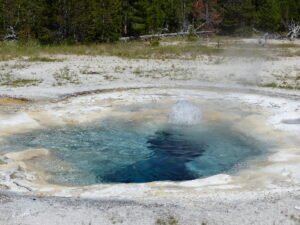 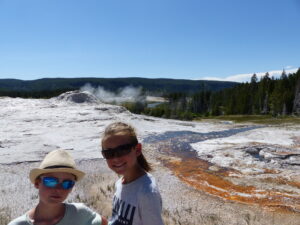 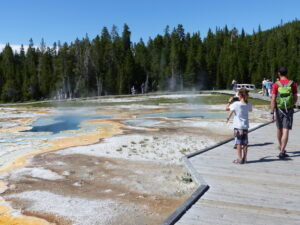 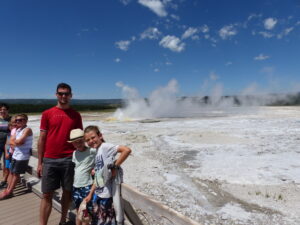