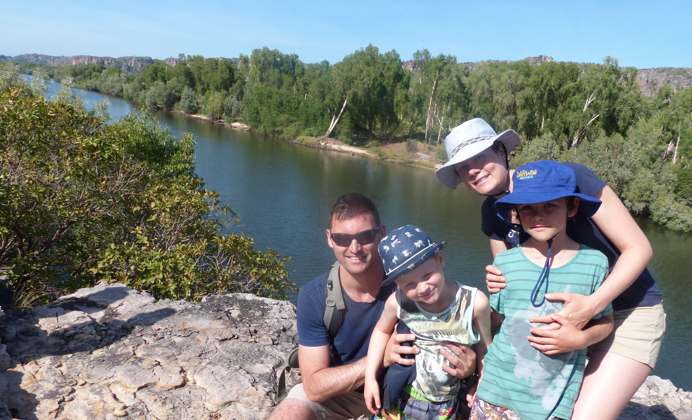 At 5 am and 30 hours after leaving Aarhus we touched down in Darwin, Australia. Sometimes getting through security in Australia can take a long time, but this time we almost set a new record and just 20 minutes after landing we found ourselves waiting in the queue to pick up our rental car. Unfortunately Europecar’s counter did not open before 6 am so it took another 50 minutes before we could finally get going.

We drove straight to the nearest Coles supermarket to pick up some items for breakfast and lunch before heading to Kakadu National park. Driving towards Kakadu it quickly became clear that the Northern Territory is quite different from the rest of Australia – it is truly “Outback” and within just the first 100 kilometers we saw:

Our first stop was the township of Jabiru which is one of the bigger settlements in Kakadu. Big is however very small in Kakadu and the whole town consists of a Gas-station, one pub, 2 caravan parks, a town plaza and a the “world famous” hotel shaped like a crocodile (world famous must mean that it cannot be ruled out that someone in the world has heard about it).

Since the world famous crocodile hotel was full we had booked a bungalow in the Anbinik caravan park. We arrived around 11 am and walking to the reception we could already feel the heat, but apparently “only” 32 degrees is considered a brisk morning here. Being Danish and quite jet-lagged we were however looking forward to turning on the AC and relax before getting in the pool. The bush bungalow was, however, more like a giant permanent tent and Jesper (who has apparently been working hard on his diva attitude since our round-the-world tour) found the Outback quarters less than ideal. Quickly he reminded the travel guide/agent (Line) that AC should be an absolute minimum when staying in the tropics and kept himself busy pouting for the next 20 min..

To his excuse he had been the only one awake in the car for the last 1,5 hours and a severe jetlag combined with carrying most of the luggage in the heat apparently did not bring out the best in him.

After a trip to the pool for a few hours, shopping for dinner we could cook in the outside kitchen and a severe drop in the temperature, everyone was happy again. Actually the bungalow turned out to be a perfect fit in terms of size, facilities and night temperature. 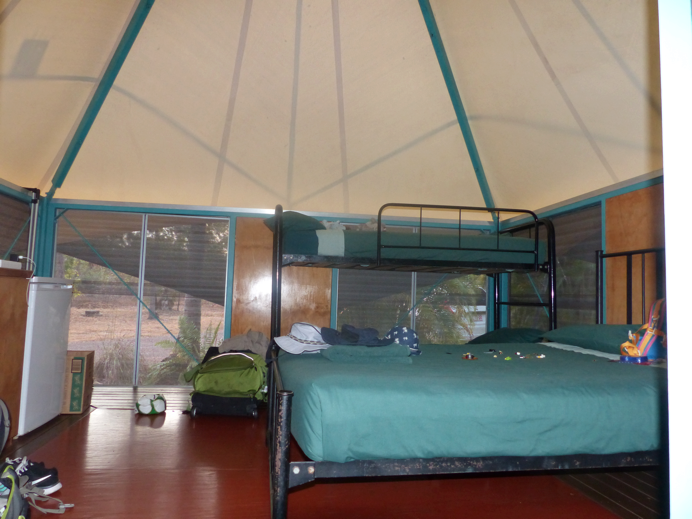 The best thing however was that we all managed to fall a sleep at the perfect time in the evening and slept until the next morning. Traveling east is normally the hardest and getting the first night right can make the difference between a week of bad sleep or no problems at all. For the first time we tried taking Melatonin pills an hour before going to bed. It might have helped – though we did feel exhausted already.

We awoke well rested in the morning and ready to head out on our first tour – a Guluyambi cultural cruise on the East Alligator River. Our guide was an aboriginal (partly, anyway) himself and shared lots of knowledge about the aboriginal way of life on the way, as well as finding lots of crocs for us to see. 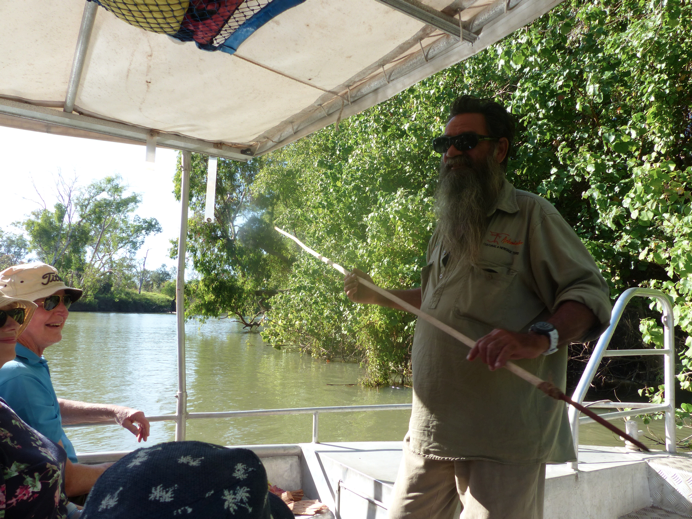 Some of the crocodiles were huge, and the saltwater crocodiles are notorious, so he was quick to tell us to keep our hands inside the boat – which everyone happily agreed to do. Vitus, who is normally very outgoing and hard to convince about the consequences of certain actions, complied without question.

The tour itself was informative and the nature beautiful and scary at the same time – so many poisonous, dangerous animals and plants but also extremely impressive how the Aboriginal people have been able to survive in this hostile environment for more than 20.000 years. The length of the tour was perfect, long enough to be informative and enjoyable, but not so long that the kids got bored. We were the only family on the tour, the rest of the people on board were about 30 years our seniors :-). 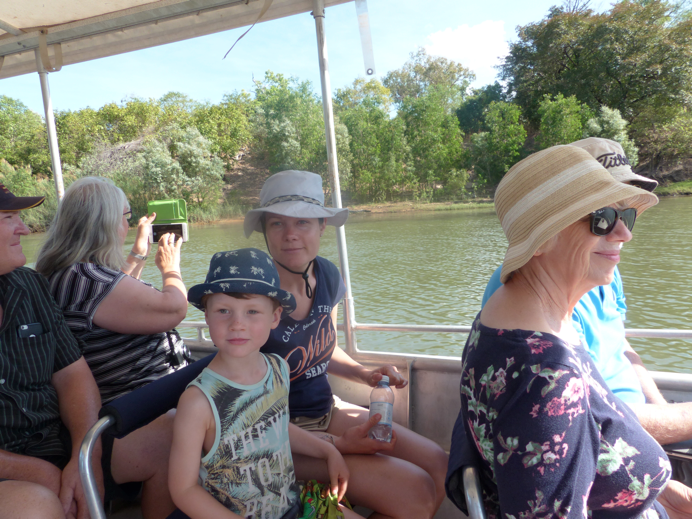 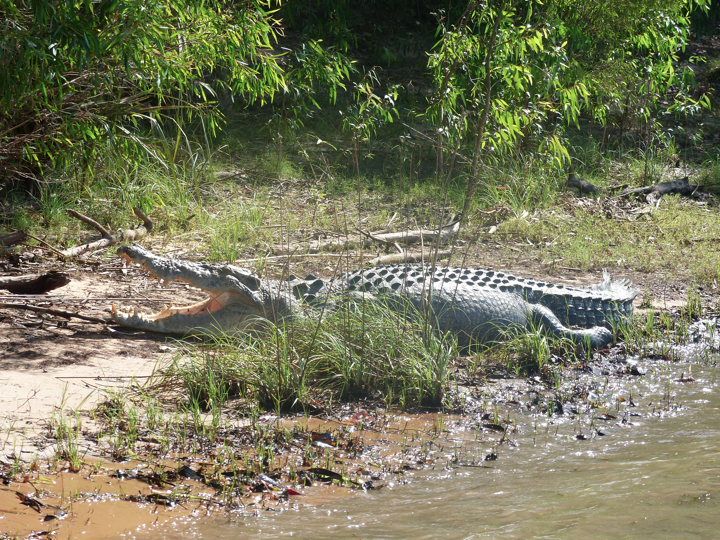 After the tour, we spent a few hours cooling down by the pool, and in the evening we decided to see what local dinner at the pub was like (something the owner of the campground had suggested). We had to sign in to go inside and there was a dress code that we barely met – not because it was a fancy place at all, it seemed much more to be for safety reasons. Not that we felt threatened, but the pub next to the restaurant part of the establishment, seemed to be a pretty rough place (we couldn’t have come in if we wanted to, no kids were allowed). The tucker – Australian word for food, was not impressive, which we might have anticipated, but we hoped that the ambience and experience would make up for that. As it turned out, we were the only customers dining in that night, but they sent out lots of take out.

In the morning, we checked out of our bush bungalow and headed for the town (as we thought it was) of Cooinda. We wanted to see Jim Jim falls on the way, but the road turned out to be unsealed (dirt road), so we did not go, since it is not permitted in normal rental cars. It’s a 4WD only road and we did not want to take the risk.

Instead we went directly to Cooinda, which turned out to be just a hotel and tour company at the end of a sealed road. The hotel was great, though – small bungalows and a large pool area, restaurant, gift shop and tour desk. As we asked for things to see on the same day, they suggested we go back the way we came from to see the rock paintings at Nourlangie Rock Art Site. As we could not check in before 14 anyway, we drove the 30 minutes back to take a small walk and see the paintings – an experience well worth the journey. We liked both the 1 km walk in the rugged terrain and the impressive and ancient rock art paintings. 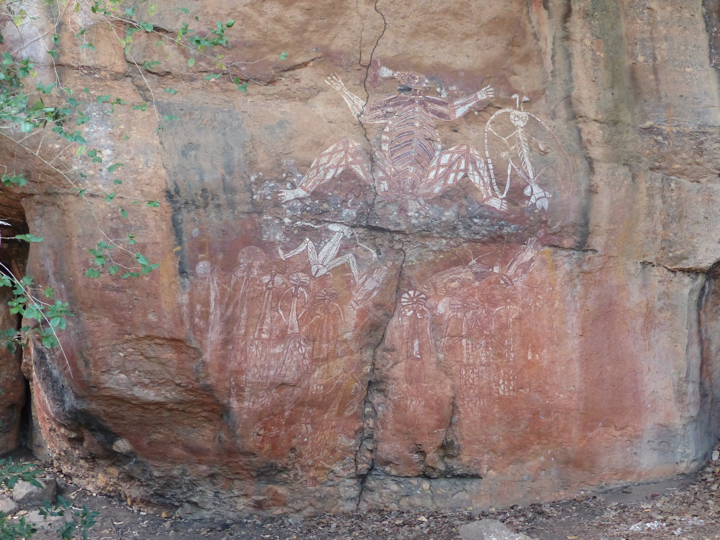 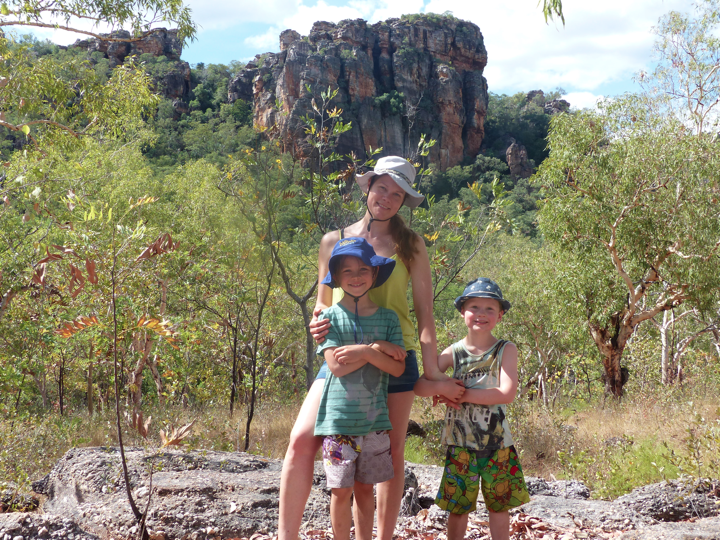 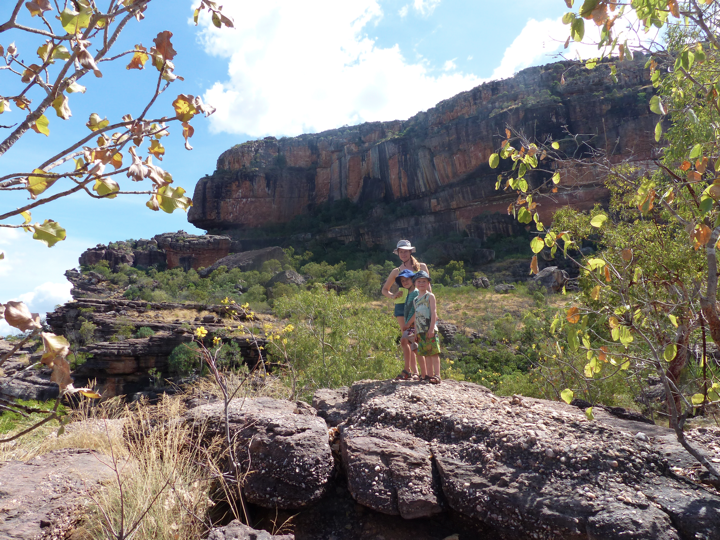 It was really hot – around 34-35 degrees in the shade, so after the tour we hurried back to try the large pool at the hotel. Vitus tried to swim, dive and jump in the water without his puddle jumper for the first time ever – with Jesper ready to pull him out of the water when he raised his hand – a system that worked brilliantly.

We could not get him to come out so eventually we had to insist, since he was shivering from the cold water. He was so proud of himself that he suddenly seemed 5 cm taller 🙂

Noah practiced his swimming a lot, it needs a bit of a brush up since we haven’t done much swimming since our journey around the world last year – but he is making progress and will get a lot better once we go to the sea and he is wearing his snorkeling gear.

At the end of our day at Cooinda Lodge, we had dinner outside at the hotel’s restaurant, which was a much better experience than the pub in Jabiru. There was even live music, and as usual, Vitus started dancing in front of everyone, which was immensely cute. Noah is a bit shyer and doesn’t dance much (especially in public), but when some of the other kids at the restaurant started playing Tag, he was in. The kids spurted around for the next 45 minutes before we had to drag them home to bed. We have a sunrise tour tomorrow morning at 6.20, so they need all the sleep they can get.

It’s so great to be travelling again and the 4 of us thoroughly enjoy the time together – the kids already play a lot better with each other than they do at home, they know that they are each other’s best friend for the next 6,5 weeks.