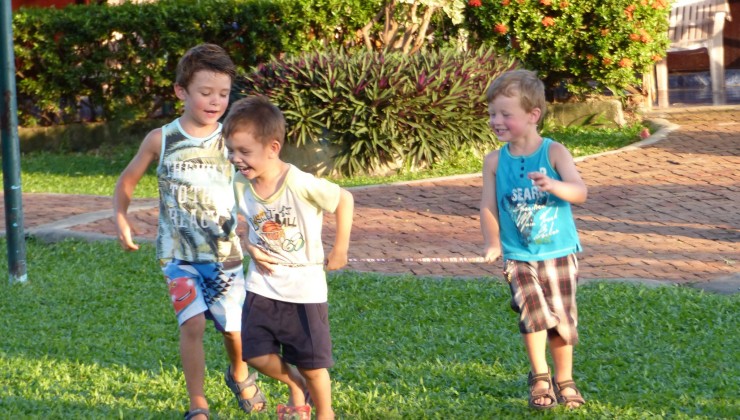 We must admit that we had dreaded the journey from Cyprus to Thailand due to the bad flight times (stop over in Amman from 23-2.30), but it actually went really well. Both of the boys slept for a couple of hours in the airport of Amman, and Noah was sleeping again as the plane for Thailand took off at 2.30. Vitus and Line were served breakfast at 3 am, and then went to sleep (mostly Vitus, as Line had to hold Vitus’ head most of the night).

As we arrived in Bangkok, we were able to find our luggage immediately after passing Immigration, which was a great relief. We got in line for a taxi outside the airport and headed for the southern bus terminal in Bangkok, Sai Tai Mai. But unfortunately we had reached Bangkok (with more inhabitants than all of Denmark – around 7,7 million people And cars – so it seems anyway) right at rush hour. After being stuck in trafic for 1,5 hours, the taxidriver told us, that it would have been much faster to take the cab all the way from Bangkok airport to Kanchanaburi, and the price would have been 1600 Baht (around 315 Danish kroner). Vitus had just fallen asleep in the car and we couldn’t get ourselves to wake him up after such a long journey, so we agreed a price with the driver, who was driving very safely. We got to Kanchanaburi in 4 hours and it cost us 1800 Baht plus tip.

When we got to Pong Phen guesthouse in Kanchanaburi, where we had reserved a room (or so we thought), we were met by the most rude attitude we have ever experienced in Thailand. There had been a misunderstanding regarding the booking, as they had not confirmed our confirmation – but they found a large airconditioned room for us and set up an extra bed. We slept like babies all night and woke up at 10.50 am still thinking it was the middle of the night. It left us only 10 minutes to get dressed and order breakfast before the kitchen would close. We made it though, and breakfast was simple but nice.

We actually chose Pong Phen guesthouse not only because it could accommodate all of us in one room, but mostly because it has a pool, which we thought would be a nice way to rest after the journey. We had read on Tripadviser that there is too much clorine in the water, but we thought “how bad can it be?” – well, really bad, it turns out. Both kids have small scratches from falling over constantly, so shortly after getting into the pool, they complained about the water stinging badly. No more pool for us! The guest house is very central though and the room is nice.

For the rest of our first day in Thailand, we took a stroll down the street in Kanchanaburi to find a tour operator and book a full day trip and a canoe trip. The lady selling us the canoe trip (River Kwai Canoe Travel) recommended us to go and hang out at the Jolly Frog – a backpacker resort by the river with a large garden and a restaurant. The kids needed some place to run around since there is quite a lot of traffic. We bought some softdrinks and settled down in the garden, and the boys quickly found a playmate. A 4 year old English/Thai boy, and they played together for a couple of hours. It was great to see Noah use the English he has learned, and Vitus even tried to speak English as well. We got some good Kanchanaburi tips from the boys father, and as we were talking to him at a raft on the river, Noah fell in the brown/green water of the River Kwai and hung on to the raft. We were standing right next to him, so we quickly got him out of the water. It is really hot here, one of the warmest places in Thailand, we were told, so Noah didn’t mind being wet;-) 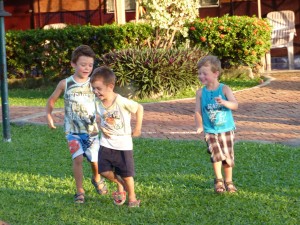 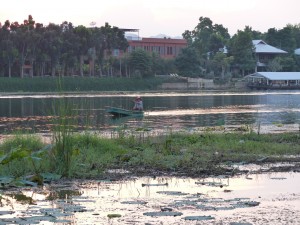 For dinner we went back to Jolly Frog restaurant – the menu was a bit overwhelming with more than 200 dished to choose from, but the food was great and really cheap. We paid 400 Baht for dinner for 4 plus fruit shakes for all and a beer – around 80 Danish kroner.

Today we went on the canoe trip, 7 km down the river Kwai. We had to get up at 9 am (oh my!), but as we are still jetlagged, Noah was sure it was in the middle of the night. The trip was a nice experience even though it was really hot and we had a hard headwind for a couple of kilometres. We stopped at a floating restaurant just besides the River Kwai bridge (famous from the movie Bridge over the river Kwai). People were looking a bit surprised to see us moor at the restaurant from a canoe:-) a bit pricey compared to downtown Kanchanaburi, but still very cheap compared to European prices.

The trip ended at a colourful temple with dragons on its top and sides. 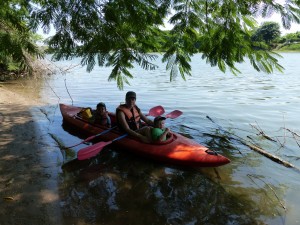 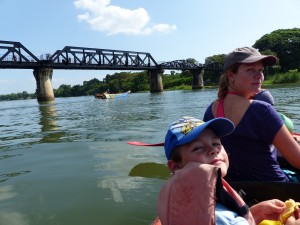 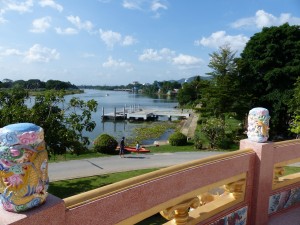 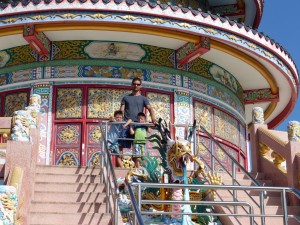 Tonight we went to the Jolly Frog again for dinner, Noah got to choose the restaurant. We let the kids have Spaghetti Bolognese, which they finished in no time.

Tomorrow we are going on a full day trip in the area and afterwards we will try out T & T guest house for a couple of days. First impression is that they are a lot more friendly.