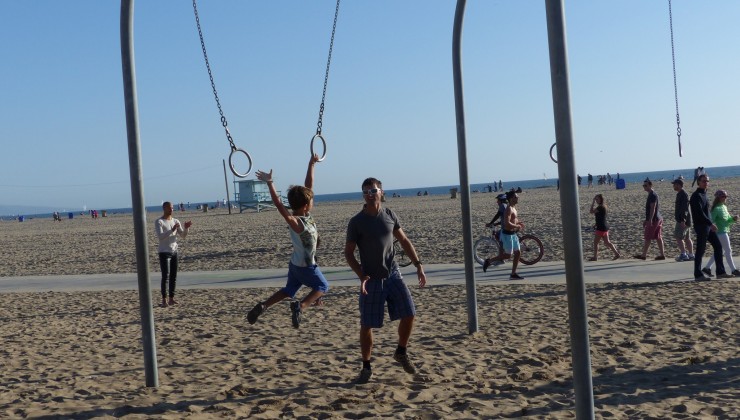 We meant to visit both Disney Land and Universal Studio but after quite a bit of googling and getting advice from the locals we decided to go for the smaller Knott’s Berry Farm instead. Also we had been quite active on Maui going on trips pretty much everyday. But what about Hollywood Boulevard you might ask? Well, could we exchange it for the drive we did up the coast to Ventura we probably would (read: DEFINITELY would), but being extremely busy and touristy it just did not seem like the perfect place with two kids and they definitely would have found it boring.  When we asked Noah and Vitus what they wanted to do the answer was simple – “Playgrounds”. If we come back when the kids are bigger Universal Studio is however on the top of our list.

So this is what we ended up doing during our 5 day stay in La:

Venice Beach turned out to be a great place to spend a couple of hours. Lots of weird characters to look at, shops selling just about everything and great playgrounds. 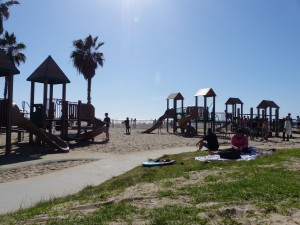 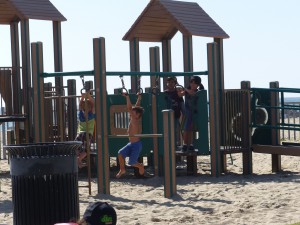 Noah is now officially a Coke drinker – never thought that would happen. 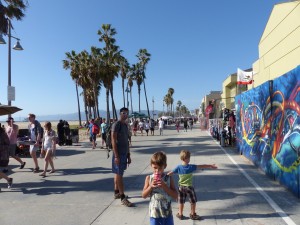 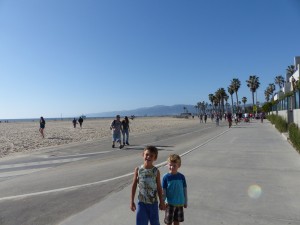 Hard to tell what was the Venice Beach highlight but unfortunately the thing we will probably remember the most was the parking ticket we got (we did not know you could not park facing the wrong direction on a small side-street). We have asked for an initial review so there is a small chance we don’t have to pay – it really is hard as a tourist to know all the local traffic rules.

After Venice we walked the 2 km. north to the “Original Muscle Beach” a giant playground for kids and adults with huge swings, traveling rings, ropes, bars and much more. A really nice concept that has very little to do with the weights and atmosphere at the “Other Muscle Beach”. We had great fun there and since Noah has been working out pretty much every day he actually did quite good in the traveling rings. 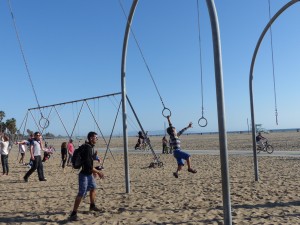 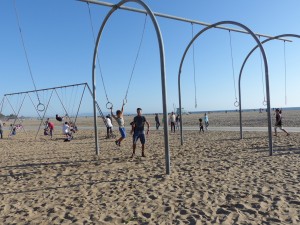 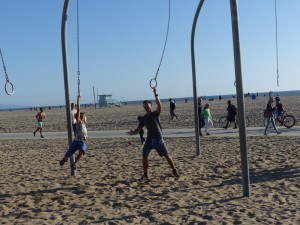 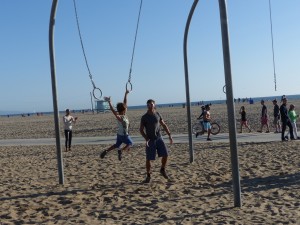 Much better than Jesper who could hardly hold on for 5 seconds. 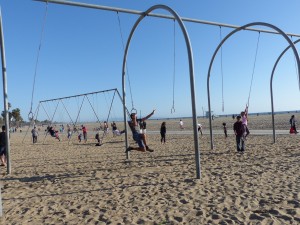 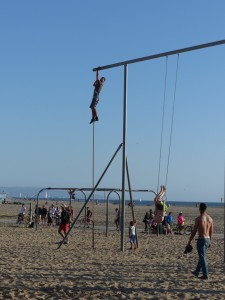 Vitus tried a few things but most of the time he was just a happy spectator. A hot dog on a stick helps 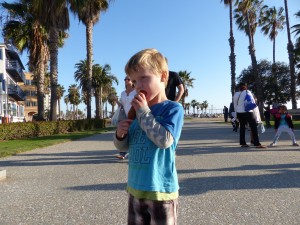 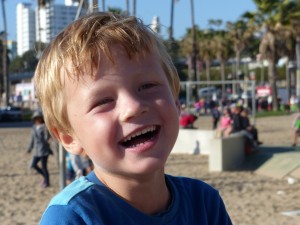 Turned out to be an unexpected highlight on our LA trip. Parking was terrible and we had to park 1,5 km. down the mountain from the Observatory but once there we got great views of LA 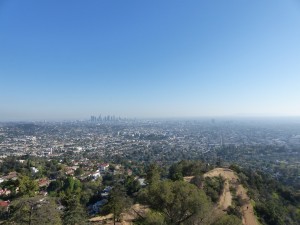 The kids absolutely loved all the things you could do and try inside. Noah was especially interested in everything regarding space and big bang which put quite a lot of pressure on Line and Jesper’s knowledge as he continued to ask more and more questions that honestly were hard to answer. “What is an electron”, “how do galaxies form”, “what is the biggest thing in our universe” etc. etc. 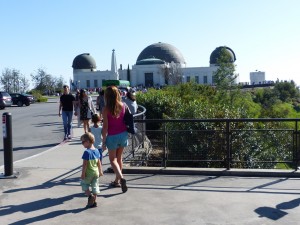 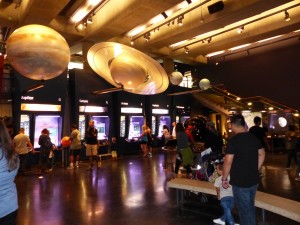 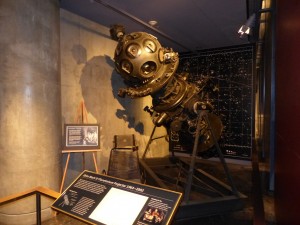 There is a big lawn in front of the observatory where we spent some time hanging out – Noah found a new skill he wanted to learn “handstand” which pressed Jesper to show if he could still do that (he could but damn it is hard supporting your own weight – did it always take som much effort?). 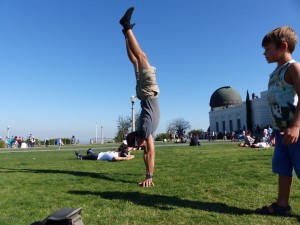 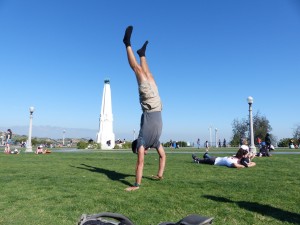 We did not know what expect of the Griffith Observatory but it turned out great and it was impressive how much you were able to see and do there and how well it is set up for smaller children to enjoy. And it is free. 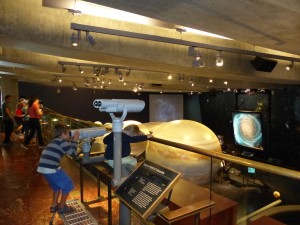 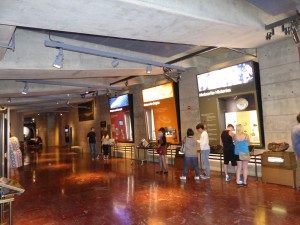 They show different movies at different times a day (not free) – if you are traveling with children under 5 you do however need to be aware that they are only allowed on the first show each day – unfortunately we were too late.

Only afterwards did we find out that the park right next to the Observatory features one of the best playgrounds in LA – too bad we missed it.

Drive up the pacific highway to Ventura

Definitely the worst thing we did in LA. We had heard that the drive up along the pacific highway through Malibu and towards Santa Barbara could rival the Great Ocean Road in Australia. Unfortunately it was not the case – we did however spend much of the day stuck in LA traffic and the highlight became the visit to a small playground in Oxnard.

We did not take a single picture that day which typically is a good indicator of how good a day it was.

Both Noah and Vitus needed a quiet day before moving on and asked if we could just find a playground and have fun there. After some Googling – Polliwog Park in Manhattan Beach sounded like the perfect place to spend a day with 3 playgrounds and a nice lake. 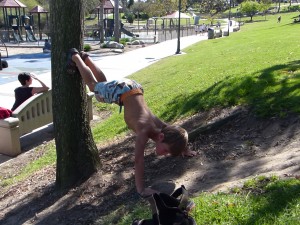 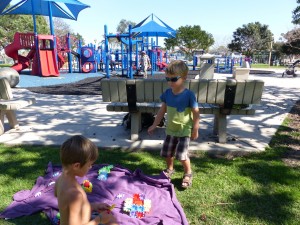 We had a great and very quiet day there. The boys found friends on the playground (we never get tired of hearing him play in English with local kids), we picked up lunch at Subway and just relaxed played and did some reading (Line got a late birthday present and is now also the proud owner of a Kindle Paperwhite). 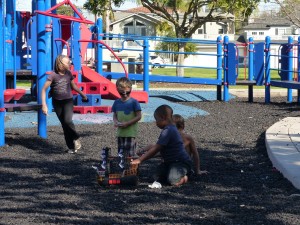 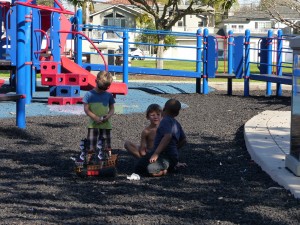 After 5 days our general impression of LA is that there are just too many people. Highways are packed with cars almost 24/7, people are overly aggressive and the city is so big that it takes forever to get anywhere. On the plus side we visited some great attractions and we had lots of fun. No regrets visiting LA but also a bit relieved that we are leaving for Mexico now.

« We almost left Hawaii without visiting a hospital or doctor – but had to leave the plane before takeoff
A fantastic day at Knott’s Berry Farm, LA »