Friday (Oct. 23.) we wanted to go to the beach. Before leaving the apartment, we researched the beaches in Larnaca and found YANNATHES BEACH that sounded appealing. As we got near though, we could see that despite the wave-brakers the waves were very high. So we kept driving and found Lenios beach just down the road that had boulders all the way round, so there was a tiny area without waves, where the kids could play safely in the water. It wasn’t an ideal weather for going to the beach, in fact it was very cloudy in the beginning, and Line thought it was too cold to get into the water. The kids didn’t seem to mind though, and jumped right in.

The beach itself was quite depressing; lots of trash, the Lenios hotel that the beach used to belong to, was closed and looked like something out of a ghost movie – like many many other hotels we have seen here in Cyprus. At the beach there was an empty life guard’s tower that looked like it hadn’t been used in years, and on the rocks a large timber raft. It was easy to imagine what a nice place it must have been once.  The kids didn’t mind and found the beach very exciting and liked to climb up into the tower and run around on the raft. The best things that happened for the adults at that beach was that Jesper found a pair of swimming goggles (he had forgotten his own in Denmark and wearing contact lenses they are a must) and an intact Carlsberg beer in the abandoned life guard’s tower 🙂 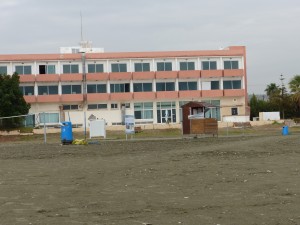 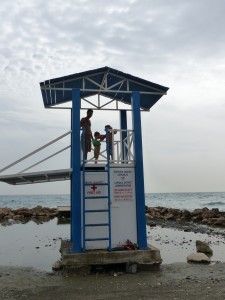 On the other side of the large rocks, the waves were very high and Jesper and the kids went in and had a lot of fun jumping over the waves as they rolled in. 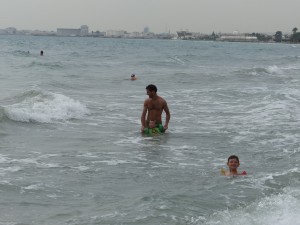 After spending a couple of hours at the beach, we received a text message from Isobella, who’s apartment we are renting, stating that the flamingos were now coming to the salt lake. So we rushed over there, only to find the lakes still totally bird-deserted. No luck this time either… but another nice walk by the salt lake, and again the kids didn’t mind. Amazing though how much more water was now in the lakes compared to just a day ago.

Saturday (Oct.  24.) we went to the Anastasia Aquamania Waterpark in Protaras (right next to Agia Napa) which was a replica of the one we visited in Paphos, so the kids were familiar with the slides from the beginning. When researching from Denmark, we thought we would go to Water world Agia Naps (Europe’s largest themed waterpark), but after visiting the water park in Paphos, we realised it was way too large for our kids, and they would not even be able to go on half of the slides there. 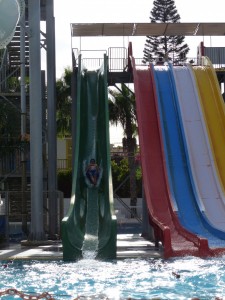 We had brought lunch from home, and since it wasn’t allowed to eat that at the water park, we went to the beach for a picnic. The water was shallow and great for the kids to swim in and there was a floating bridge that they could run and play on. Noah went snorkeling and after that we took a stroll and bought ice cream. 2 cups of 3 scoops seemed reasonable for 4 people  but they were HUGE, though we fought to the bitter end we just could not finish them both and for all of us it was the first time ever not finishing ice cream – a total defeat and a not something that will be easy to recover from 🙂 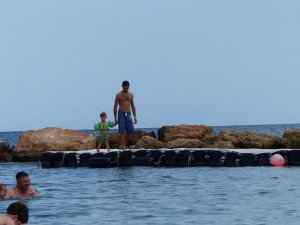 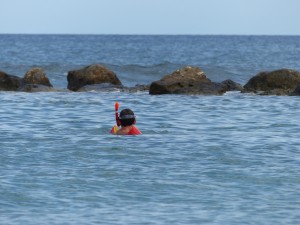 Cyprus will likely be the last chance to make dinner on our own and when we asked the boys what they wanted the answer came within 2,5 seconds “meatballs in curry with rice, banana and pineapple”. So be it! 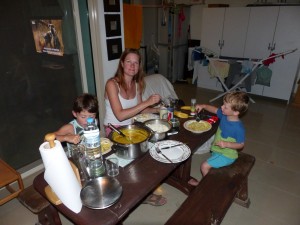 Sunday (Oct. 25.) we had planned to go to Nicosia but unfortunately the weather forecast had changed in the morning and predicted all-day rain inland, but only a rainy morning in Larnaca. Instead we spent the morning trying to research for places to go with indoor activities, what to do in the coming days and for the first week in Thailand. We should have known that was a bad idea, but sometimes you need to be reminded. 2 boys with much too much energy were constantly getting into fights in the apartment, hitting themselves on various tables and tile-floor, stealing each other’s toys to pick a fight and to say the least we were all exhausted by the time the rain had cleared and we went to find the flamingos and an indoor playground.

Wearing long sleeved shirts we left the apartment in pretty bad mood but just getting out was a relief. First we visited the Hala Sultan Tekke Mosque which is right next to the Larnaca Salt Lakes. A great place to visit with lots of cute cats running around on the grounds. 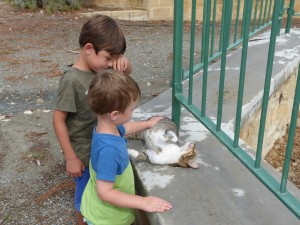 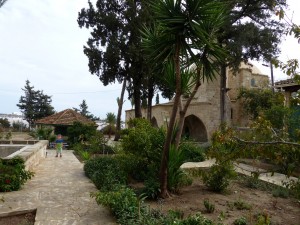 After that we finally saw the flamingos. Unfortunately they had decided to stay as far away from the view points as possible and we actually had to take a picture at full zoom and then zoom in on that picture to confirm that it was not just a set of pink stones 🙂 But check, wild flamingos seen! 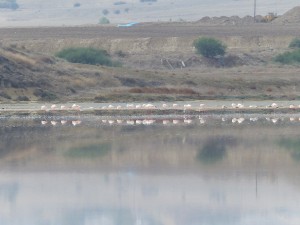 After that we went to the Ciokoland indoor playground but as luck would have it it was closed for a private party – damn. Despite the weather forecast promising overcast all day the sun was suddenly out and due to the high humidity it suddenly felt like 35 degrees. Wanting to find a beach for snorkeling we settled on Faros beach which looked really nice. After about 20 wrong turns we arrived at a deserted beach which looked more like a building site and literally you could not get anywhere close to the water because of various building machines blocking the way. In the mean time the boys had fallen a sleep, the clouds had returned and we were now at a point where we started laughing at our wasted day driving around chasing various activities with very little success. 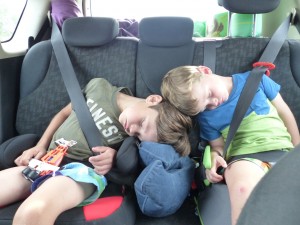 We did however manage a nice swim on Mckenzie beach on our way back to the apartment where the sun was back for 30 min. before disappearing for good.

To round of the day Line stepped barefooted in dog-poo when she stepped out of the car back at the apartment which very nicely summed up the day 🙂 Thinking that we needed something to look forward to we started checking the weather forecast for Thailand which of course showed a very unusual return of cloudy and rainy weather just a few days after our scheduled arrival. GREAT! 🙁