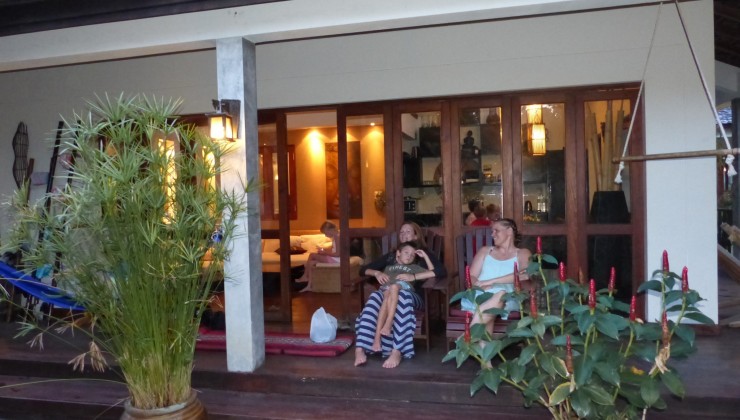 One of the big sources of inspiration to do our round the world trip was the Kniberg’s “Big Family Trip” back in 2011-2012. By pure coincidence they are staying in Koh Lanta 2 month from October to December and when we announced our travel route on twitter Henrik Kniberg was quick to invite us to stop by Koh Lanta and visit them there. That turned into a great 12 days on the Island.

We had not planned any specifics when we got to Koh Lanta besides staying at Klong Dao Beach since it is nice, sandy and shallow and also the place where Henrik and his family were staying. We asked the taxi driver to let us off at a restaurant on the southern end of the beach and basically just drove along the road until we saw a nice looking restaurant by the beach. There we would get some dinner and Jesper could start looking for a place for us to stay.

Barely had we put our luggage down in “Restaurant Phet” before we saw Henrik and his wife Sophia playing guitar and violin on a small podium in the restaurant – practicing for a surprise serenade for a newly wed couple at Slow Down (the place they are staying). 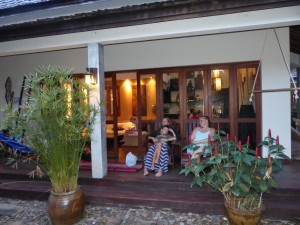 Though Klong Dao is not big there are at least 30 restaurants at the southern end so quite a big coincidence. We had a nice dinner together at Phet before Jesper had to go find a place to stay – by this time in pouring rain but he still managed to find a very good deal at Cha-Ba Guesthouse and Bungalows (maybe the manager felt sorry for him – when she saw him looking like a wet dog). 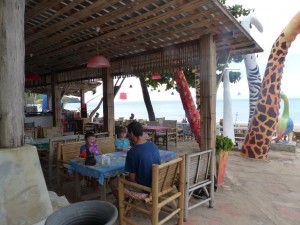 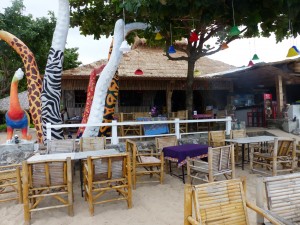 A couple of days later (Noah was sick again for 2 days so we put all social stuff on hold) Henrik and Sophia invited us to Swedish music quiz at Slow Down. A very nice experience and fortunately most of the songs were in English so we were able to participate on almost equal terms. Line totally rocked and had she not had to help Vitus go to the toilet in the final session our team definitely would have won (or so we keep telling ourselves :-)). Koh Lanta is in general packed with Swedes and Swedish restaurants and signs are everywhere. Almost makes you wonder if they are doing a silent invasion of the Island – there are already two Swedish schools to choose from should you want to spend more than just your holidays i the Tropics. 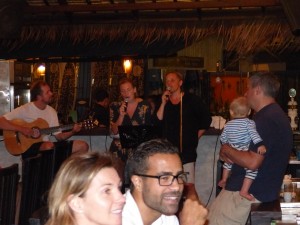 For the children the big attraction was the children’s buffet – all the burgers, fries, sausages, pancakes, chicken nuggets and carrot and cucumber sticks they could eat (which turned out to be quite a lot). Line took the Kids home to sleep around 9.30 pm which gave Jesper and Henrik a chance to talk nerdy Agile/Lean stuff for a few hours and go through Henrik’s Keynote presentation for the Agile Tour in Bangkok a few days later. That went on until the mosquito repellant was starting to wear off and they were being eaten alive.

After a tip from Henrik’s friend Andreas at Slow Down we went to Lanta Gym for Muy Thai for kids at Long beach a couple of days later. Henrik bringing 3 of his kids and we took both Vitus and Noah (though we were a bit unsure if Vitus was too young). Basically you can just show up at 3 pm and pay 300 THB per kid.

Normally only 4-5 kids would participate but this time there were closer to 15. Noah has wanted to start Karate for the last half a year so this was also a good chance to see if he could stay focused and follow instructions. Naturally Lanta Gym had some problems coping with the many attendants but once they got started everything worked out fine and while Noah really enjoyed it (and were surprisingly good at paying attention and the actual techniques) Vitus had had enough after the first 15 min. Only downside is that the techniques Noah learned are now being practiced on Jesper – several times a day. 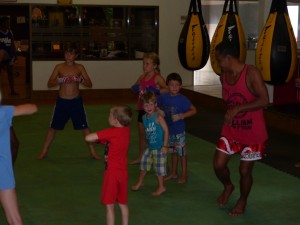 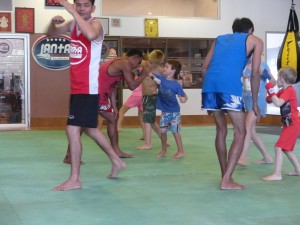 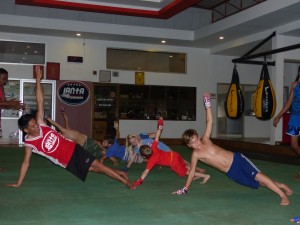 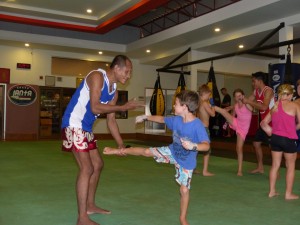 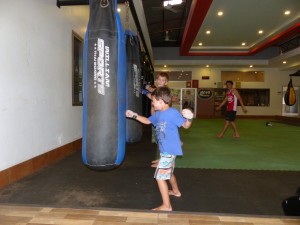 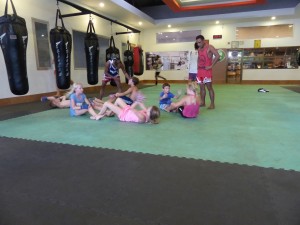 After that it was time for a walk on Long Beach and another beautiful Koh Lanta sunset. Later we joined with Sophia and Dave for some Pizza at Bajen (Long Beach) – which Noah and Vitus had been looking forward to for days after Sophia had promised it was the best Pizza’s on Koh Lanta if not in Thailand. 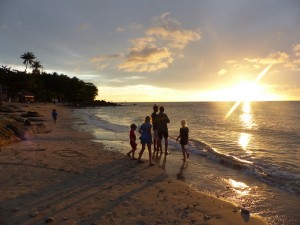 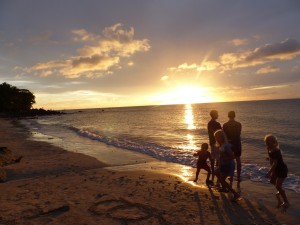 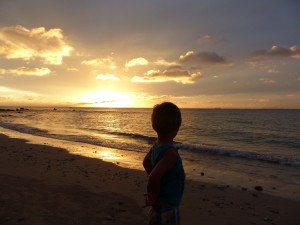 Next day Line joined Sophia for a hard workout while Jesper and Henrik got even more nerdy discussing statistical Voodoo (a.k.a Monte Carlo forecasting) at the Cha-Ba restaurant. Time will tell whether he managed to convince Henrik it was an improvement.

Our meet-up with Sophia, Henrik and their children was a great experience and it was nice staying in the same place for a longer period of time (12 days could easily end up being the longest we stay at the same place during our 6,5 month journey). On our last day at Koh Lanta we celebrated Loi Krathong at Slow Down. Sophia and Henrik played a few songs and their eldest son Dave also performed with a keyboard. We really do need to start learning to play something – looks so cool and Henrik promised that knowing just 3 cords on a guitar you can play 80% of all songs. Line has volunteered to lead once we get back to Denmark. Vitus and Noah were on their best behaviour – at least as long as they could watch DVD’s on the computer (sometimes you just need to be practical and forget about your principles…) 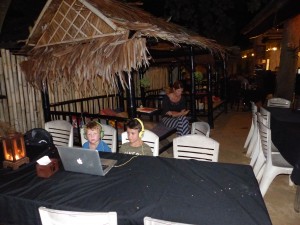 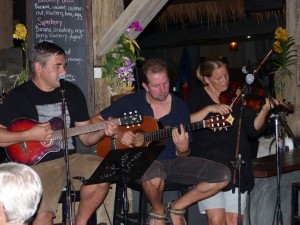 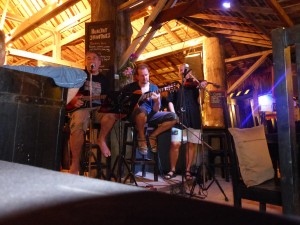 The kids tried to launch the traditional Loi Krathong baskets into the sea. Unfortunately it was not quite high tide and with an on-shore wind most of them crashed at the beach. They did not seem to mind however and Noah quickly made it into a rescue mission. 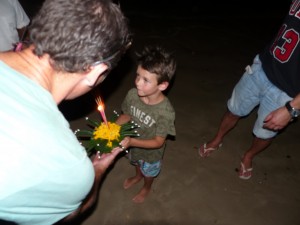