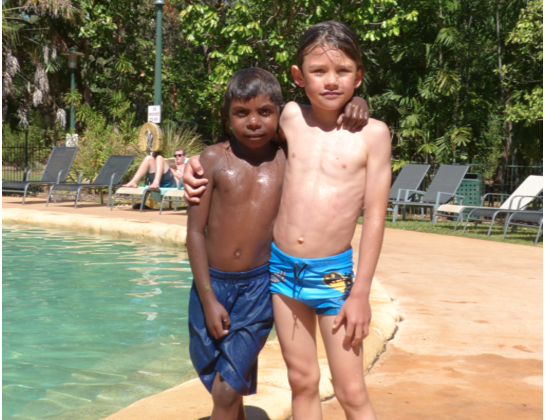 On day 3 of our Northern Territory adventure we had to get up really early to watch the sunrise on the Yellow Water Cruise at Cooinda. After a bit of hazzle getting around 160 people from the hotel to the boats we got on the water just as the sun was starting to appear. 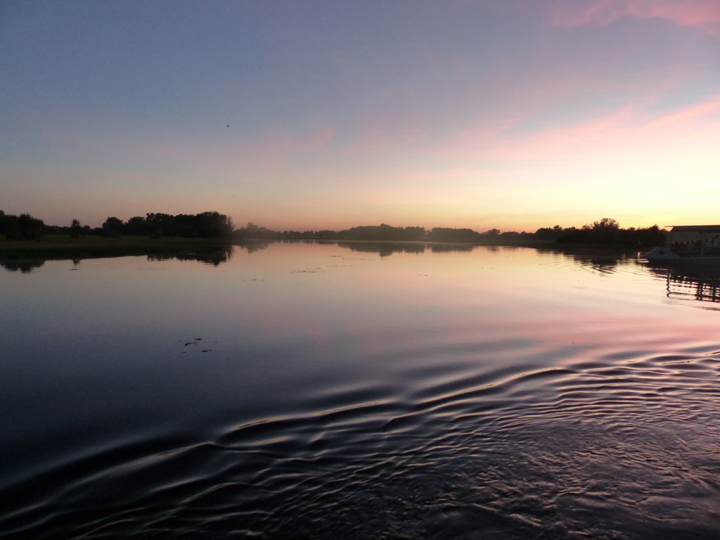 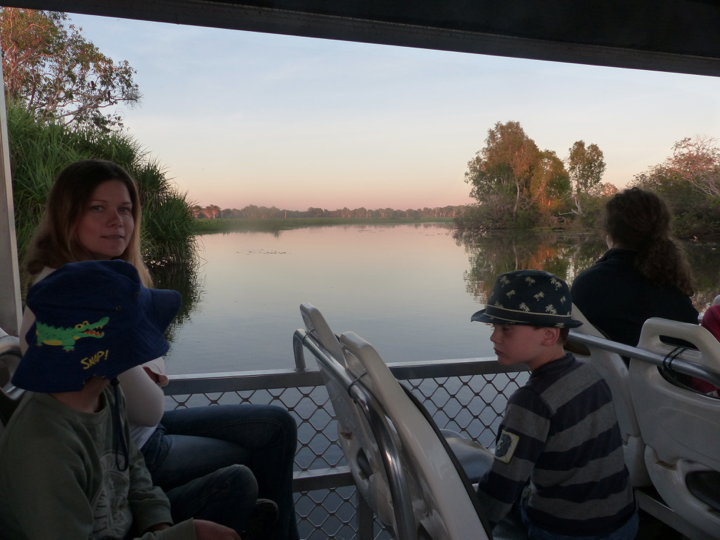 Lots of birds, crocodiles and wild horses inhabit the area around the river and there was plenty to see. It did not take long before the first white-bellied sea eagle flew right above our heads and was later joined by a bigger white-headed eagle along with lots of other birds.

Many salt-water crocodiles inhabit the area around Yellow Water and the biggest one is called Maxi. He has been fighting another big male (which the guide just referred to as Maxi’s rival) for many years and fortunately we got to see both of them along with some of their battle scars. 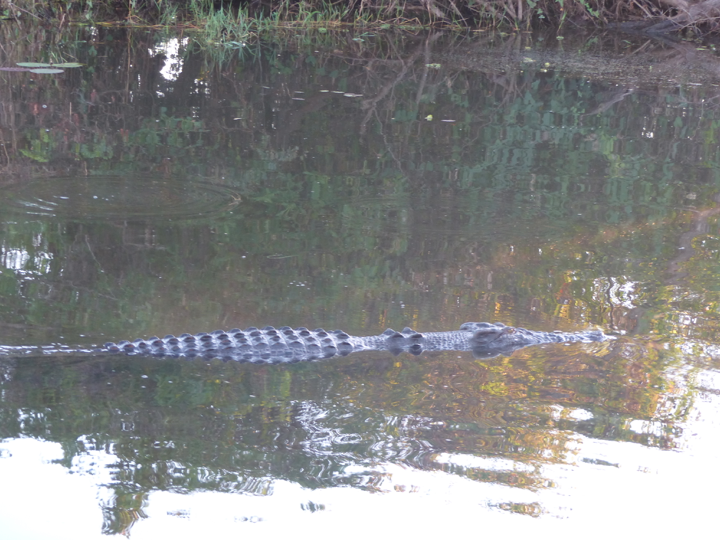 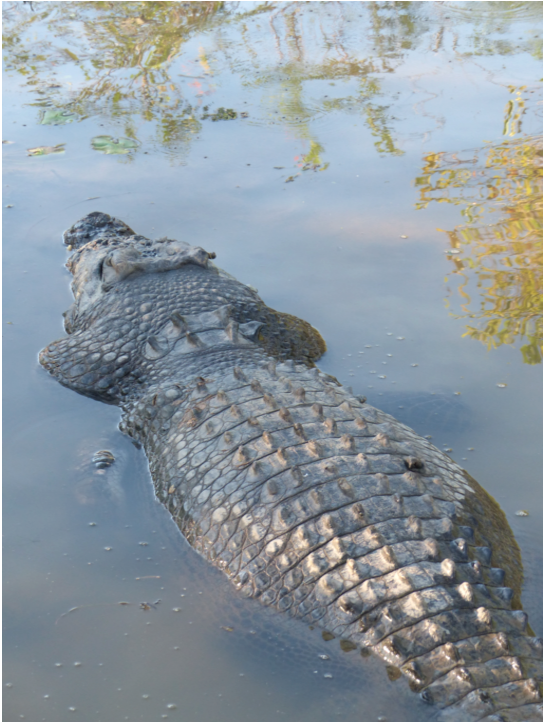 Some beautiful wild horses also greeted us along the shore. 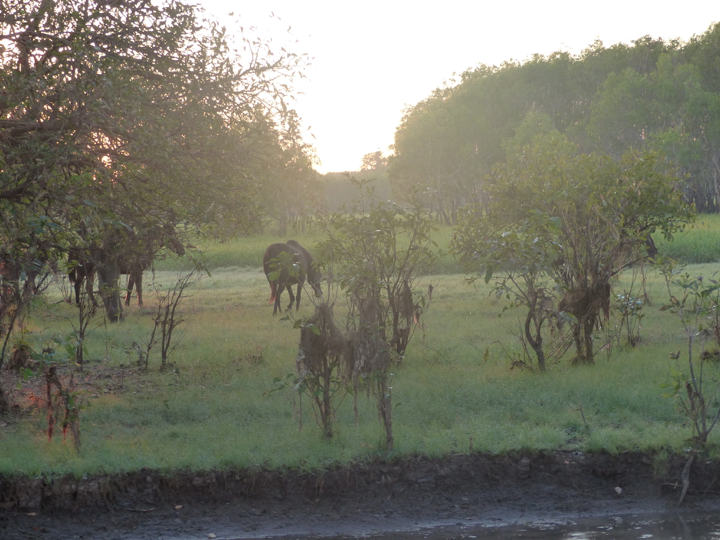 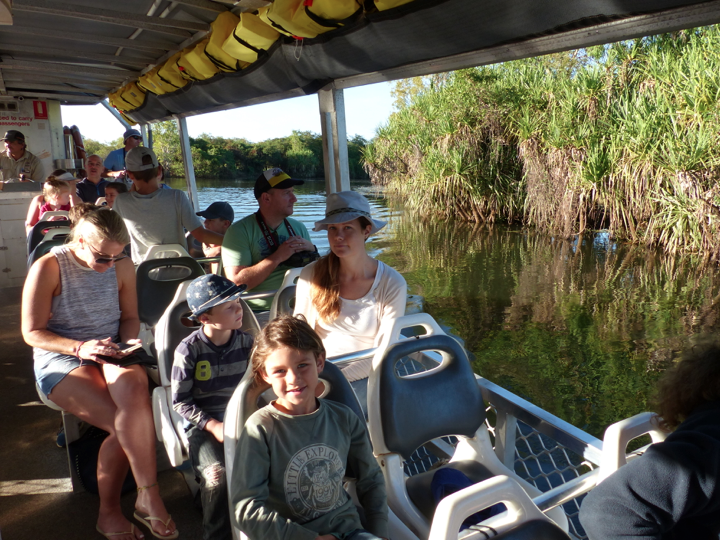 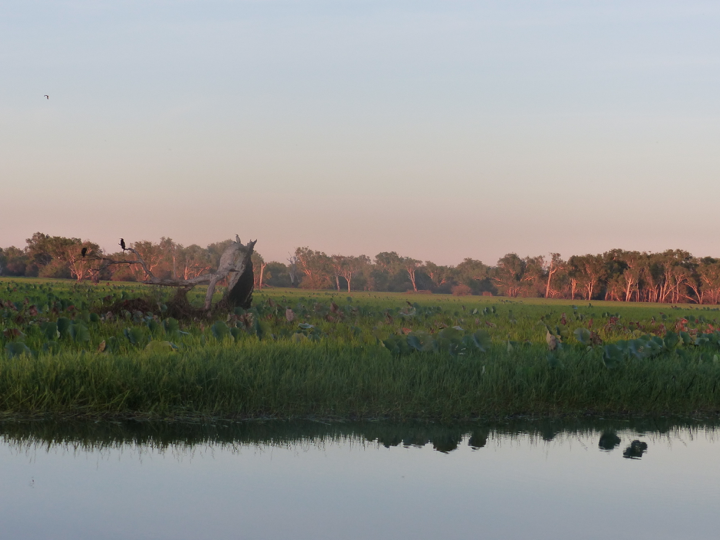 The tour ended with a big breakfast buffet and having been up for 3 hours already, we all dove in. We stayed at the Cooinda hotel a few hours more since we only had the 3 hours’ drive to Katherine to look forward to, and wanted to make the most of the great pool area.

At the pool Noah met an Indigenous Australian boy called Tyler and they played together for a couple of hours and has lots of fun in the water. It is always a pleasure to see how naturally kids interact across culture and background. 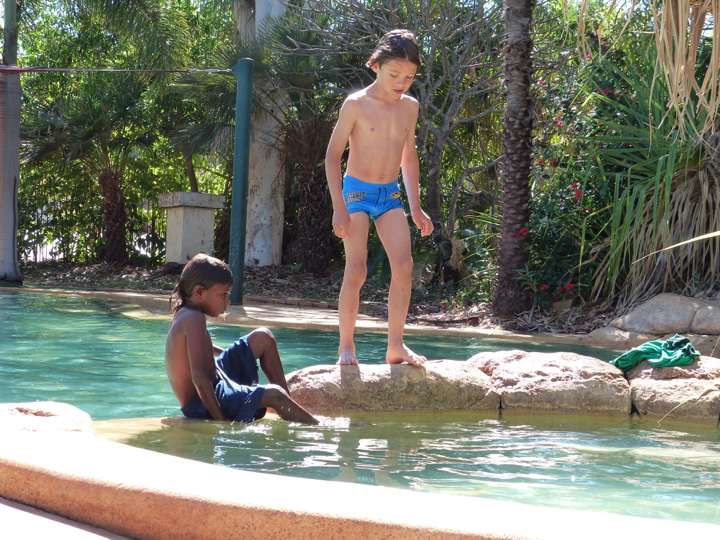 In some parts of Australia anyway, Aboriginals still seem to be on the edge of Australian society, which we noticed in towns in the Northern Territory. This is the case even though lots of initiatives have been carried out in the last years to reestablish the rights of the “Original Owners”. We are always careful in these situations to make sure that we treat everybody respectfully, but when Tyler’s dad insisted on lining the boys up so he could get pictures with his mobile phone, we did the same. And they did look quite cute together. It was, however, also very apparent that it was unusual for Tyler to play with non-aboriginals and Tyler’s dad called it “The picture of the month”. The boys had great fun together and Noah spoke a lot of English during those couple of hours. 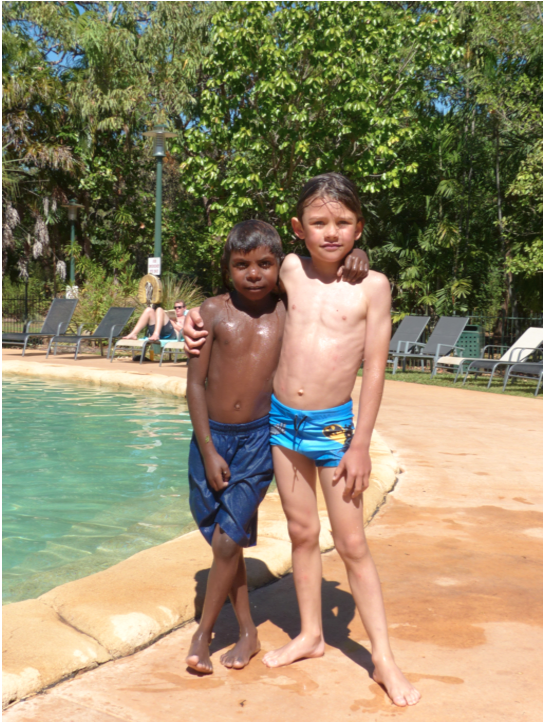 After saying goodbye to Tyler and his dad we headed towards our next stop – Katherine, which was about 3 hours south. On many roads in the Outback you are allowed to go 110-130 km/hour but if you take it a bit slower you get to see much more. On this tour we saw giant termite mounds, as well as wild donkeys and buffalos. 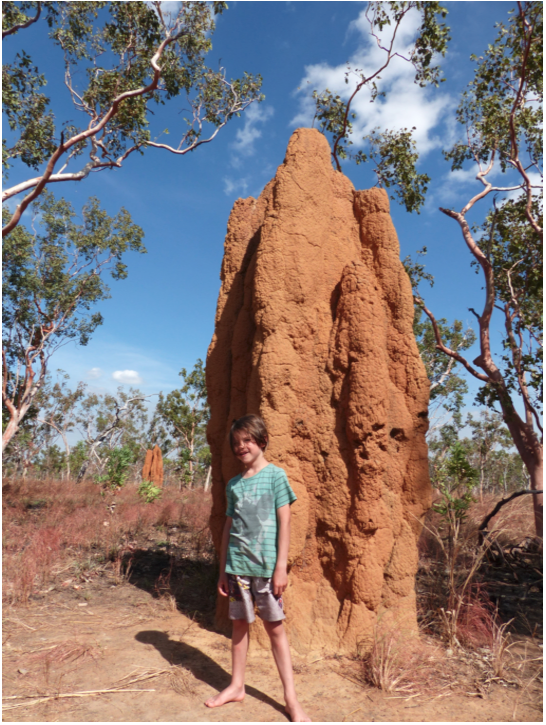 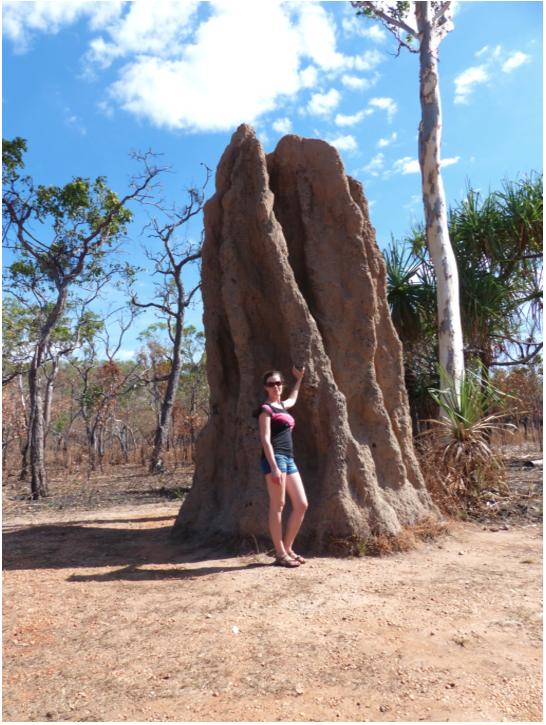 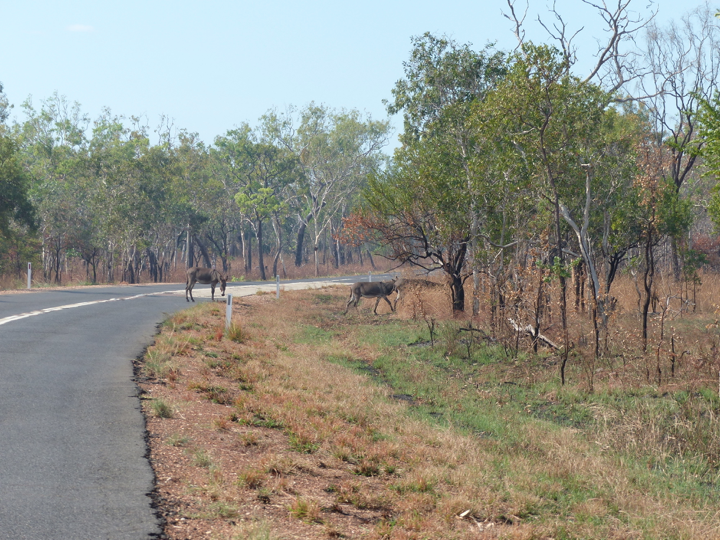 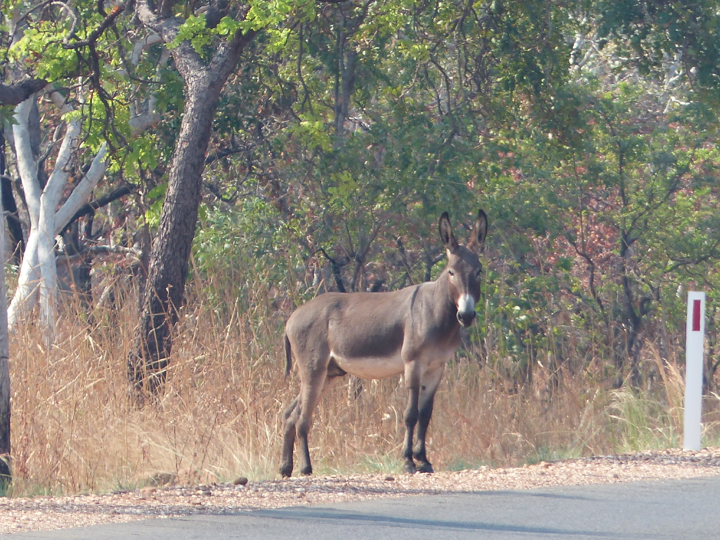 The next day we had booked a “3 Gorge Cruise” from Nitmiluk National Park near Katherine. On the walk from the information centre to the boat jetty, there are thousands of flying foxes, both red and black. They come to this area every year to breed, and it was an impressive sight, but less impressing smell. Besides the smell, they seem to have a competition as to how much they can succeed in hitting the people walking beneath them with their excrements – pretty disgusting 😉 They hit Jesper on his jacket and backpack and Noah right on the top of his hat… 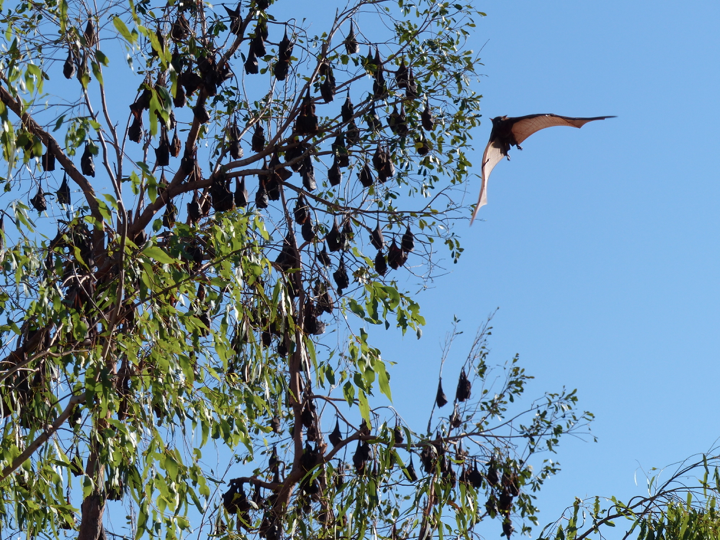 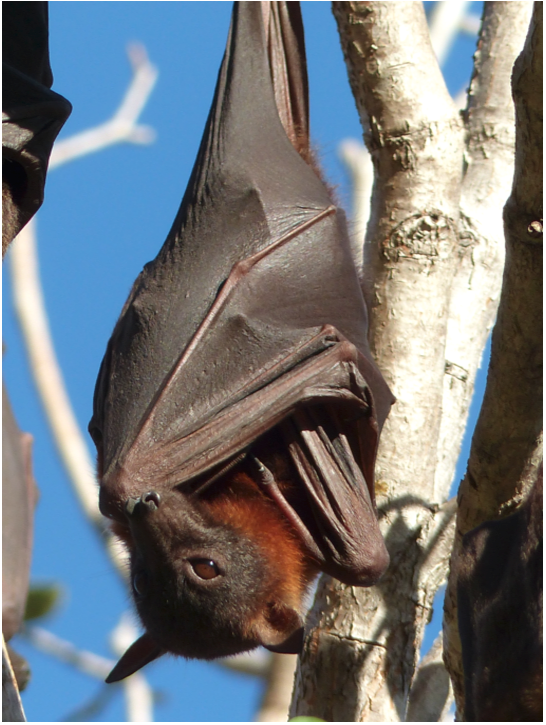 The cruise on the river was very nice, a totally different scenery than we had seen in Kakadu – the gorges are like a small edition of Grand Canyon. The boats cannot go past the shallow places along the way, so we had to get out of the boat 3 times each way and walk to another boat so we could continue the cruise on the other side. 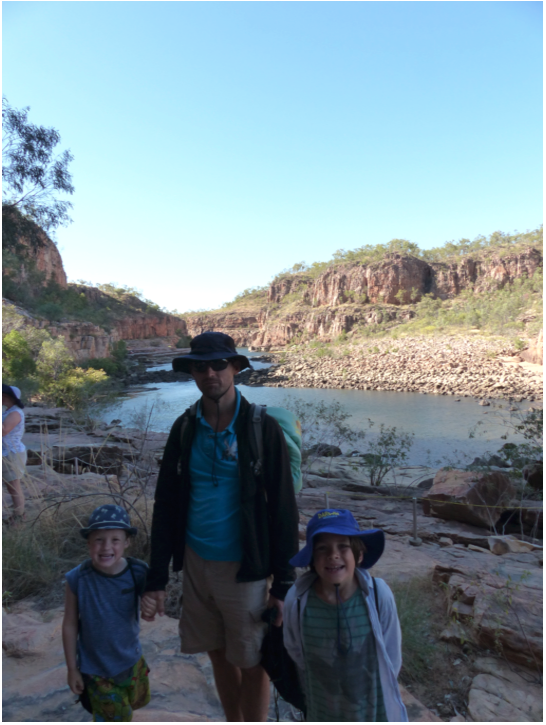 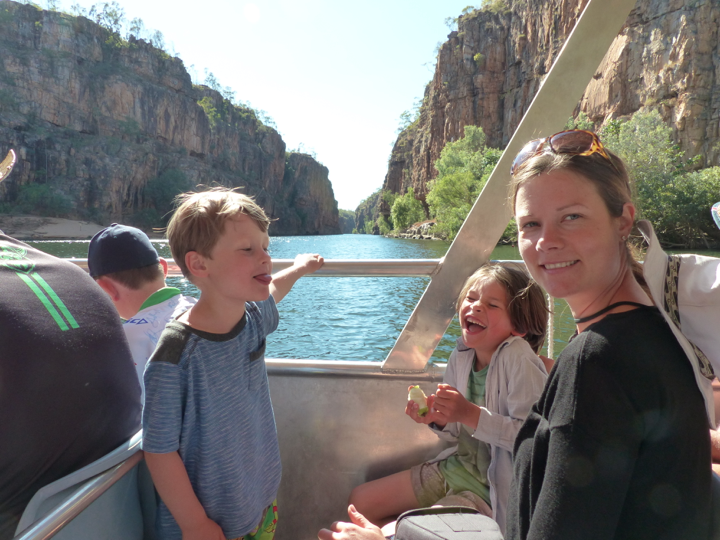 Final stop was at a lake – time for a swim: 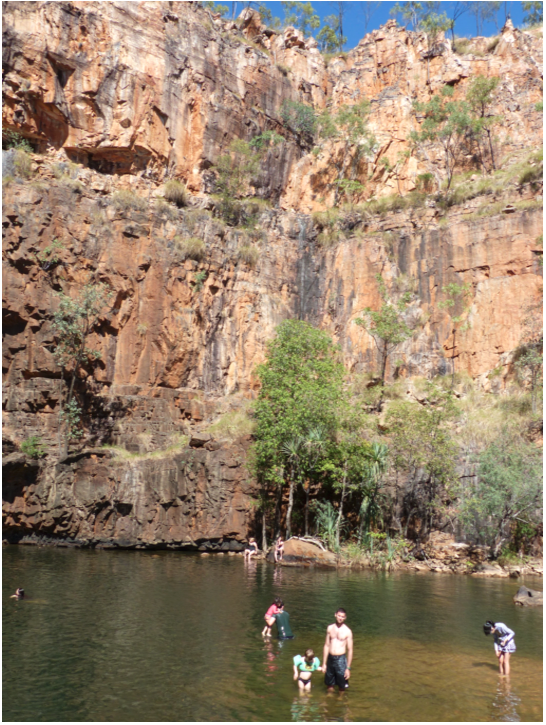 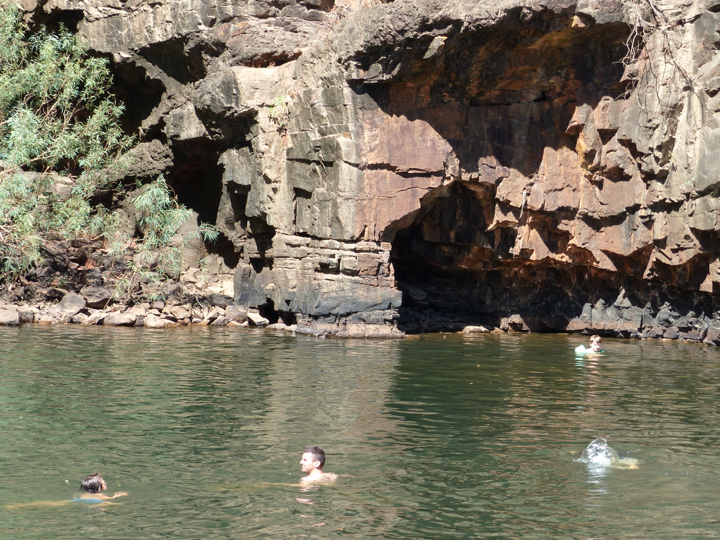 After the tour, we drove towards Litchfield National Park, around 3,5 hours from Katherine. We ended up barely getting to our hotel before nightfall, as we went to a playground in Katherine after the tour and had to go grocery shopping, too. 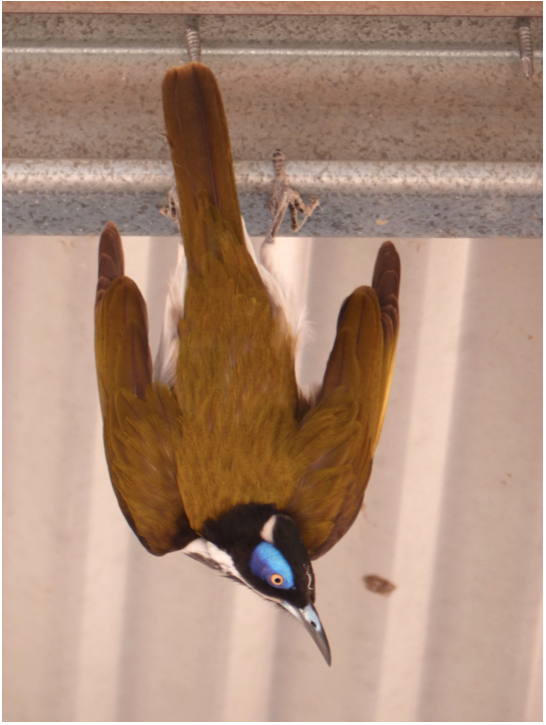 Near Litchfield, we stayed at Lake Bennett Resort – a run down hotel at a beautiful location. With the right amount of cleaning and a bit of updating and marketing, it could be the most fantastic place. The lack of guests and cleaning sadly made us want to leave as soon as possible, where otherwise we would have wanted to stay and go kayaking or enjoying the pool just beside the lake. 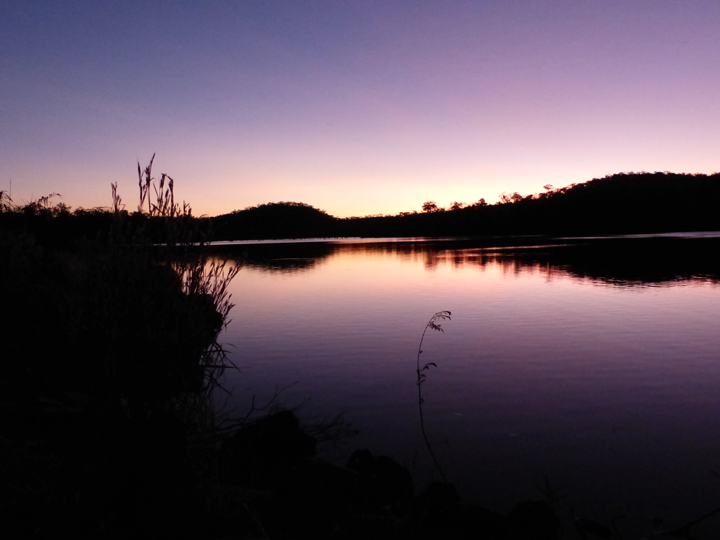 Great view from the hotel room – lots of potential, but sadly not well managed. 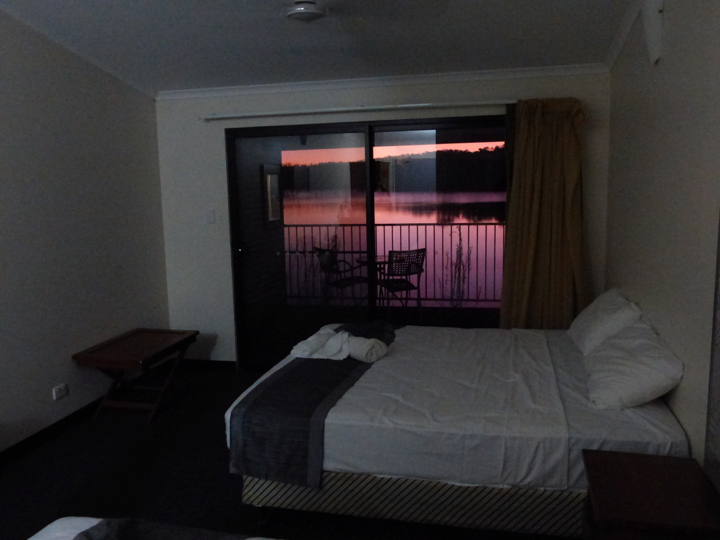 In the Northern Territory (as well as in the northern parts of Queensland), you don’t swim in lakes or rivers if you don’t want to be croc dinner, that is.

Litchfield National Park was fantastic – we could have easily spent one more day here. There are lots of beautiful waterfalls with pools to swim in (croc safely). The most famous ones are Buley Rock Hole, Florence falls and Wangi Falls – all with their own unique charm and beautiful scenery. 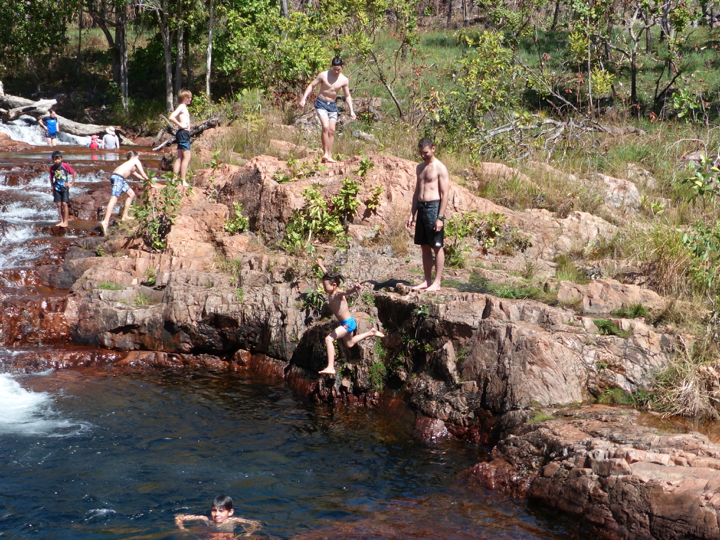 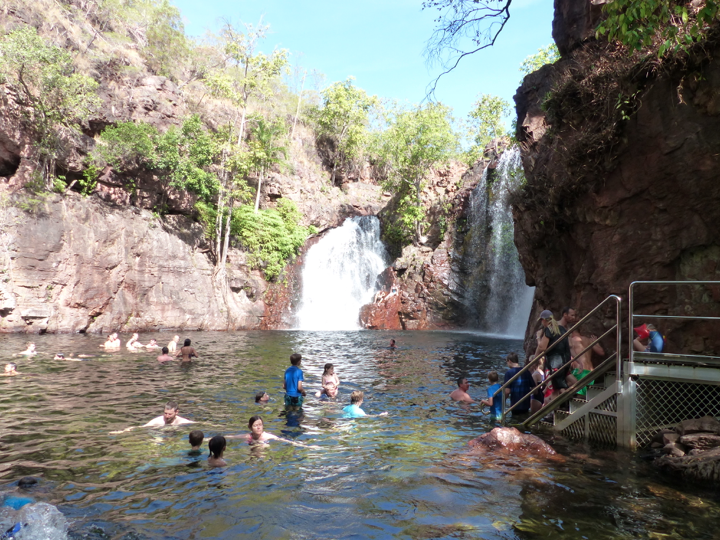 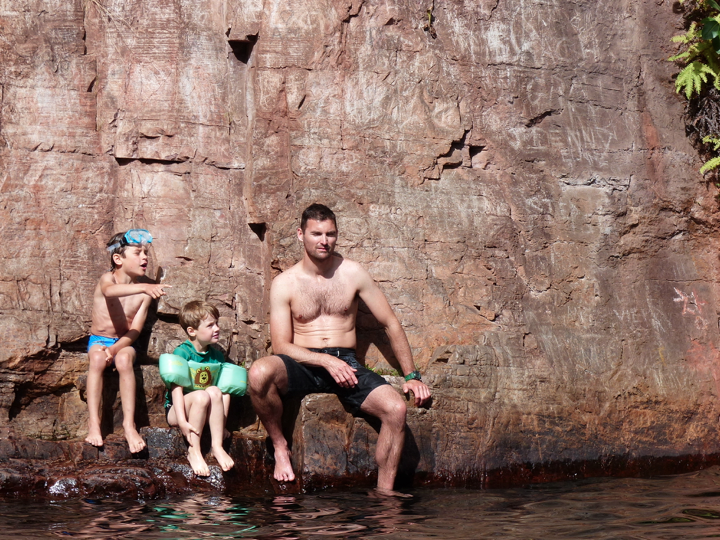 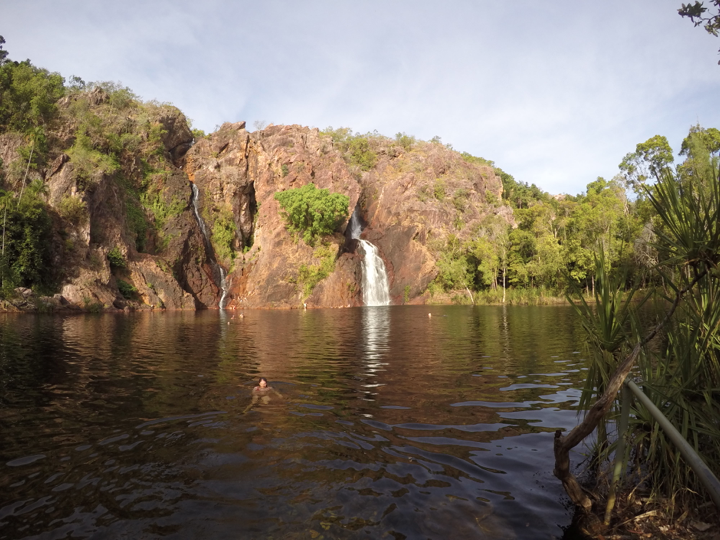 There is also an information center about termites and their mounds (like skyscrapers for termites), which was interesting, having seen so many of them on our road-trip so far. 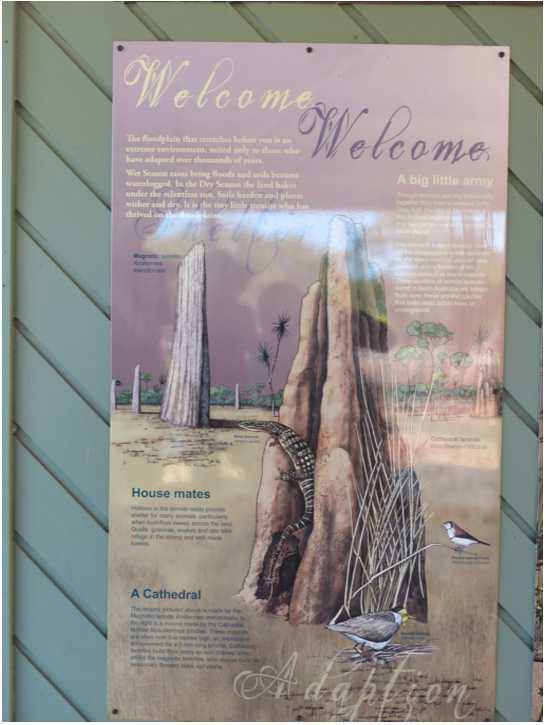 Since we were flying from Darwin to Cairns the next morning we headed back to Darwin after a full day in Litchfield. After Wangi falls you can either turn left or right to get to Darwin. Since the GPS indicated that right was 35 km. shorter and only 2 min. longer we took a right turn – BAD idea. Having already spent longer than planned we were in a bit of a hurry if we wanted to get to Darwin before dark but after 25 minutes the sealed road stopped and it was all un-sealed gravel road from there – Bummer! Since our rental agreement only allows about 15 meters on un-sealed roads we had to turn around and it was late before we finally reached Darwin.

First of July was Territory day so Darwin was constantly lit up by fireworks through the evening/night. A fantastic view and fortunately the kids we so tired they had no trouble sleeping through the constant explosions.