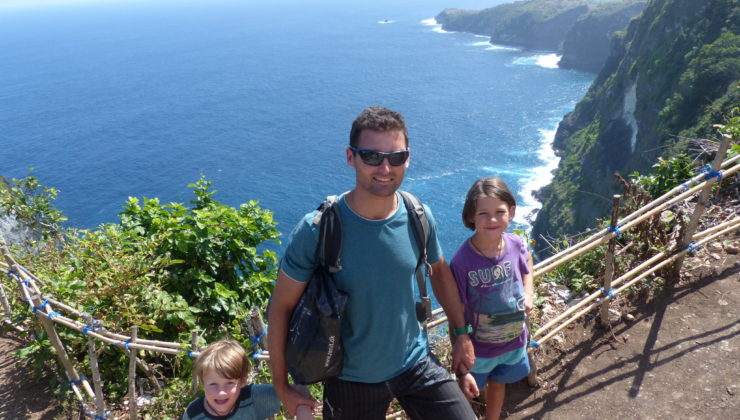 To say that we had been nervous about the boat-trip from Gili to Lembongan would be a huge understatement. Friends of ours, traveling 2 weeks before, had disembarked on the way (at Padang Bai) because they found it too dangerous and in the previous week the boat had not sailed for 2 days due to high seas. We had come close to cancelling the whole Lembongan trip several times and we paid nervous attention to the weather forecast several days before.

Fortunately luck was on our side. Being close to full moon we did get high seas and it was definitely no pleasure ride but we were not scared and only Noah threw up on the way. Given pretty light winds we could however easily imagine how much worse it could have been and the reason people react strongly on TripAdvisor.

Right next to the “Harbor” at Lembongan there are several platforms where the day tours from Sanur dock. Complete with waterslides and everything… 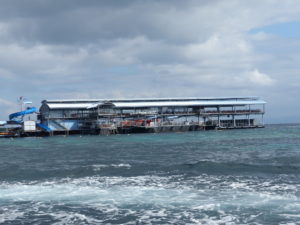 Arriving at Lembongan we were shuttled to our accommodation at Nanuk’s bungalows. A nice and relaxed place with good food and friendly staff. The actual bungalow was ok but nothing fancy. 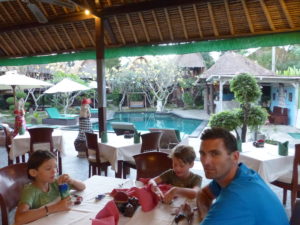 One of the main reasons for visiting Lembongan was to see Manta Rays but since Noah threw up on the boat we booked  aprivate tour of Nusa Penida on our first day instead – promising great view and a bit of trekking. That turned out to be a bad decision.

The tour was very nice to begin with and after a short 10 min. drive to the boat we were sailed to Nusa Penida.

So far so good but arriving at Nusa Penida we discovered that the roads there are the worst we have ever experienced. In some sections it took close to 45 min. to drive just 5 km and it was so bumpy that Noah threw up again despite several stops to make him feel better. To be honest it was nothing less than extraordinary that our driver managed to navigate to our first stop in a normal car without 4wd.

Our first stop was Broken Beach and Angel’s Billabong. Great to get out of the car and enjoy a bit of walking and great views. 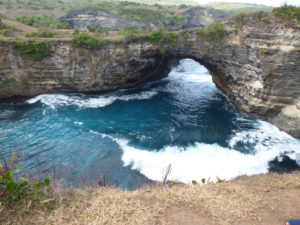 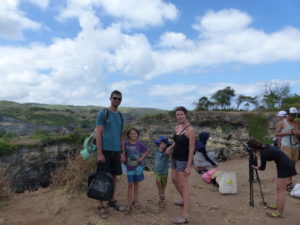 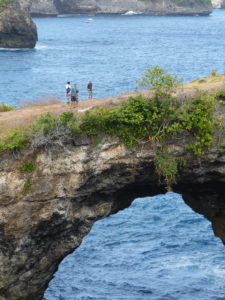 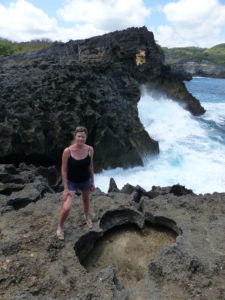 After that we drove towards Kelingking Beach. We stopped for lunch on the way and still feeling a bit sick Noah got to choose what he wanted for lunch – no restrictions. He quickly took advantage and ordered Pancakes with Ice-cream. 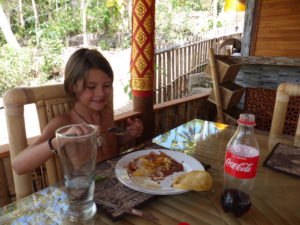 Arriving a Kelingking Beach we were awarded with one of the best an most scary views we have ever seen. Standing on the top there is an almost straight vertical crop of several hundred meters and the view simply takes your breath away. 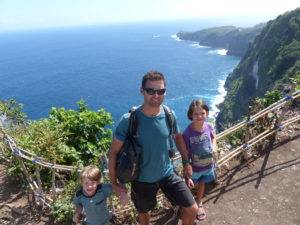 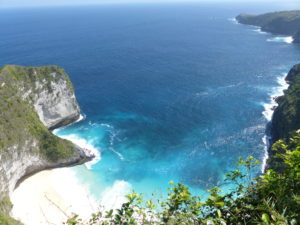 Jesper and Noah wanted to try the climb down to the beach and after some debating about it being safe enough they set out. It was, however, harder than expected and with Jesper’s leg still recovering after the MTB injury they had to stop half way to Noahs disappointment. 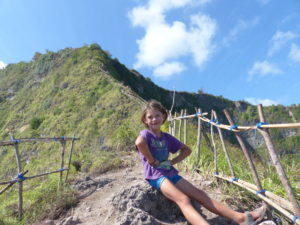 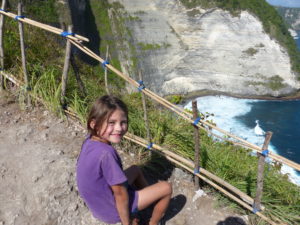 It was, however, still a great hike and down in the bay Manta Rays could clearly be seen swimming in the crystal clear water. 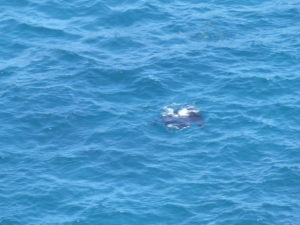 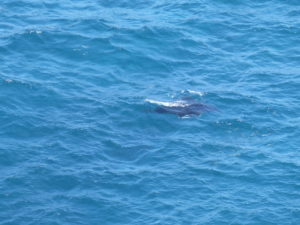 After that we chose to skip the final stop at Crystal Bay and head straight back to the hotel. It took a lot longer than expected since we had to stop once every kilometer to avoid Noah being sick again. On the boat back we got a nice demonstration of why the currents are so strong in Indonesia. What was a 500 meter wide channel between the Islands on the way out had now shrunk to a 15 meter wide stream where the boat could barely sail. 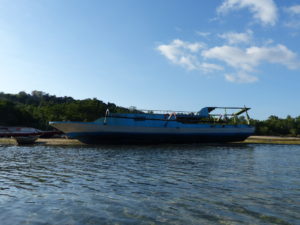 Definitely a day we will remember for a long time but not something we would ever do again while the kids are small.

On our second day at Lembongan Jesper had booked a snorkeling tour to see Manta Rays and the reefs around Lembongan. Line and the boys stayed at the pool not interested in more transport sickness. 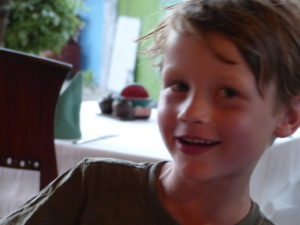 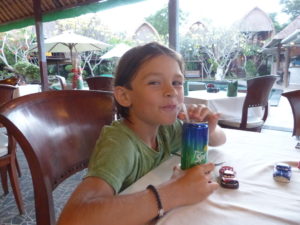 Arriving at Manta Point (right next to Broken Beach as it turned out) Jesper jumped in and immediately saw 1 then two and then tree big Mantas right in front of him. Seeing the big Rays so close for the first time is hard to explain – it is one of those things you just have to experience.

After 40 min. of snorkeling with Mantas and seeing around 7-10 up close it was time to move on to the other snorkeling spots. But to be honest it was hard to find the energy to enjoy “just another beautiful coral reef” after such an amazing experience.

Hearing about Jesper’s experience Line and the boys were naturally sorry they did not go, but with light winds and a pick-up time the next day at 12 O’clock we set out to book a private boat just to go to Manta Point the next morning.

That was fortunately an easy task and in light winds we set out for the experience of a life-time the next morning.

Again Manta Point delivered with several Mantas swimming right next to us.

After around 30 min. the boys were starting to get cold and we headed back after a perfect morning.

Just two hours later we had checked-out and boarded the Scoot fast-boat back to Sanur.