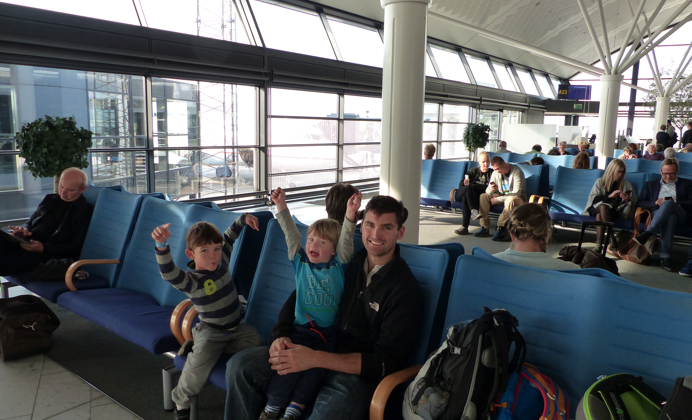 Thursday morning we checked out of the apartment in Copenhagen and went to the airport. We arrived in good time roughly 2 hours before our flight but dropping off our baggage it turned out that Jysk Rejsebureau had forgotten to include baggage for our first flight. Half an hour later, and a phone call to Jysk to clear up the misunderstanding, we had paid 100 Euros (will be refunded by Jysk Rejsebureau) to get our baggage on the plane and were hurrying to the gate. We just managed to get to the gate on time and just before boarding we received an email from Jysk Rejsebureau apologizing for the inconvenience and confirming that baggage is included for the rest of our approximately 16 flights. So far so good. 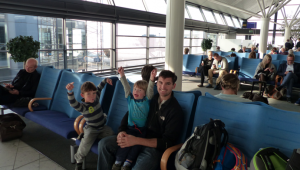 Unfortunately our plane to Athens ended up being around 30 min. late which meant that we only had 20 min. to reach our connecting flight to Larnaca. Together with 7 other people we were rushed through the airport and fortunately we made it. Parents were exhausted but Noah and Vitus surely found the “race” to be the highlight of an otherwise boring day and sitting on Jesper’s shoulders Vitus was yelling “faster, faster dad we are going to be number one” all the way though Athens airport to the obvious amusement
of other travelers.

Arriving a bit late in Larnaca we managed to decline all the extra options at the car rental despite the look of horror and “you must be living life on the edge” face from the lady at Europe car rental. But really it is just a matter of simple math and you have to be a seriously poor driver for those policies to be attractive from a statistical point of view (famous last words).

Declining the chance to remove the excess damage waiver might actually turn out to be a bad idea. First of all we did not realize that you drive on the wrong side of the road (left) in Cyprus until we picked up the car at the parking space, and after about 1 day of driving in Cyprus we have already hit more holes in the road than we would in a year driving in Denmark (roads are really not well maintained).

On the way from Larnaca Airport to Paphos we only took two wrong turns, had two fights about whose fault that was, and arrived a bit late to the apartment we had found through airbnb. The real reason for the wrong turns was that the downloaded maps for “HERE Maps” were not loading so we had to rely on google maps which is really not great for real time turn by turn directions. That did however not keep Jesper from blaming the co-driver 🙂

Arriving late in Paphos we managed to find an open Tarvarna and get some fresh charcoal cooked Kebabs while the children were almost falling asleep while eating. 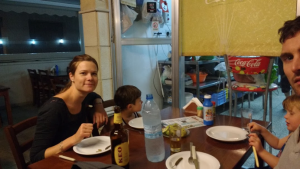 Getting back to our apartment Noah and Vitus feel a sleep instantly while we shared a cold beer on the terrace – Nice!