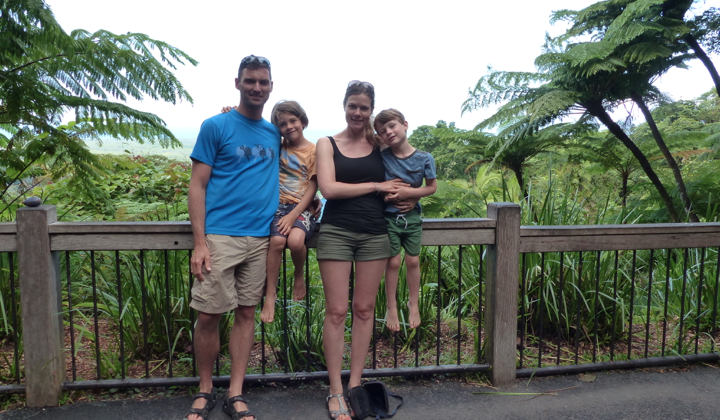 It was a clear blue sky most of the way flying from Darwin to Cairns. Well at least until the last 15 minutes when suddenly a thick layer of clouds appeared and we could no longer see the ground. Not what we expected from the dry season and it kept on raining almost non-stop for the first two days in our campervan. 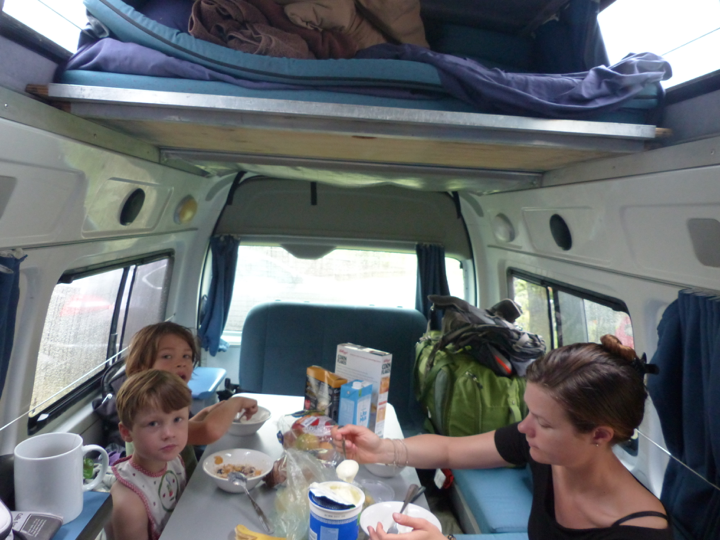 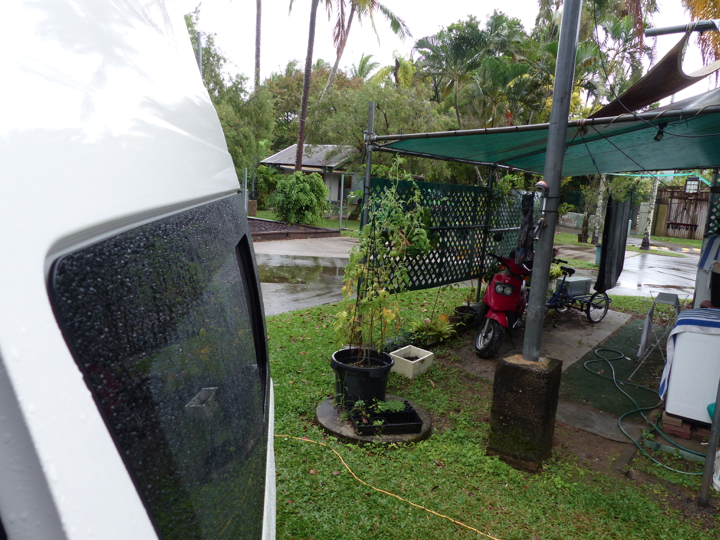 Actually a campervan is just the right size when the weather is dry, but when it just keeps on raining it does get quite cramped for 4 people. One thing you do enjoy as a kid is Campervan cinema – with chips and popcorn 🙂 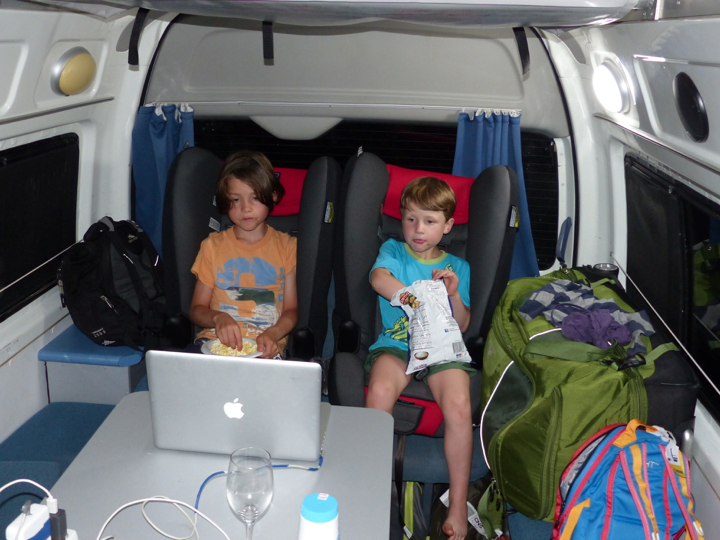 We had not really planned any wet-weather activities as it is very unusual at this time of year, but ended up visiting an army artillery museum and Barron Falls. The army artillery had a very impressive collection and it was both an enlightening and a terrifying experience. To think of the number of people killed by those specific tanks, rocket launchers and other types of machinery in the building was mind boggling as well as the money spent on this equipment. 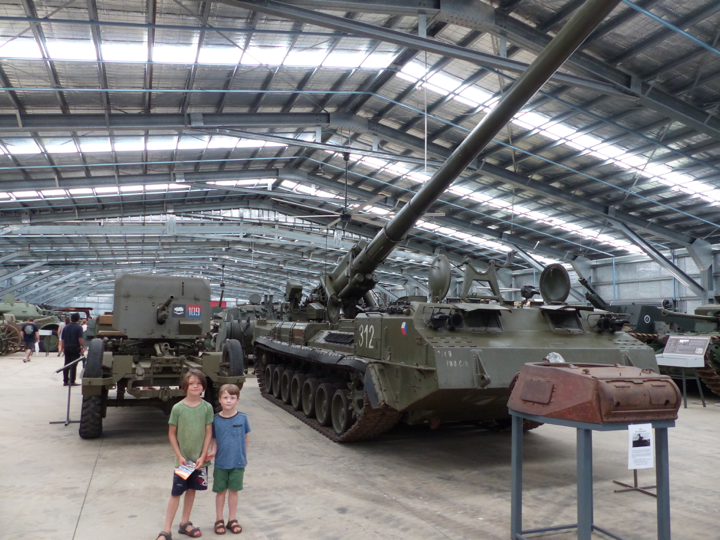 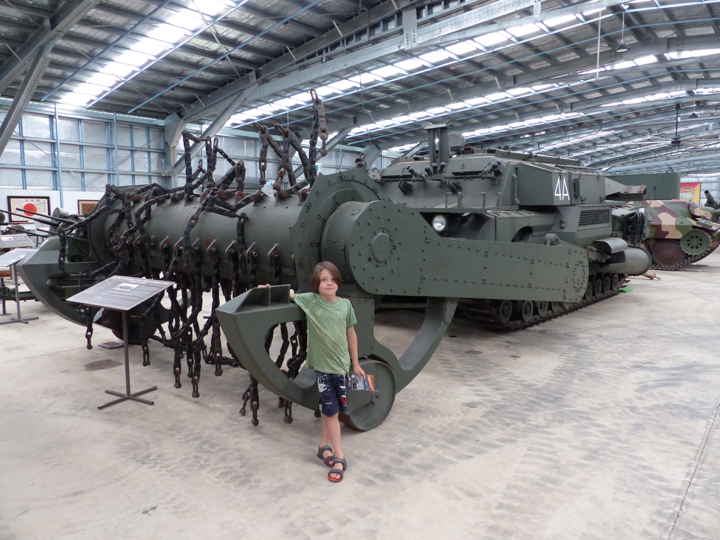 After the artillery museum, we drove up the mountains to see Barron Falls. Barren Falls is normally almost dried out at this time of year but thanks to the rain there was more than just a trickle. As an added bonus there was a great boardwalk from the parking lot – and the boys had great fun.

When the rain finally stopped after 2 whole days, we left Cairns and drove around 1,5 hours to Port Douglas. It was quite a winding road so we took a few short stops along the way 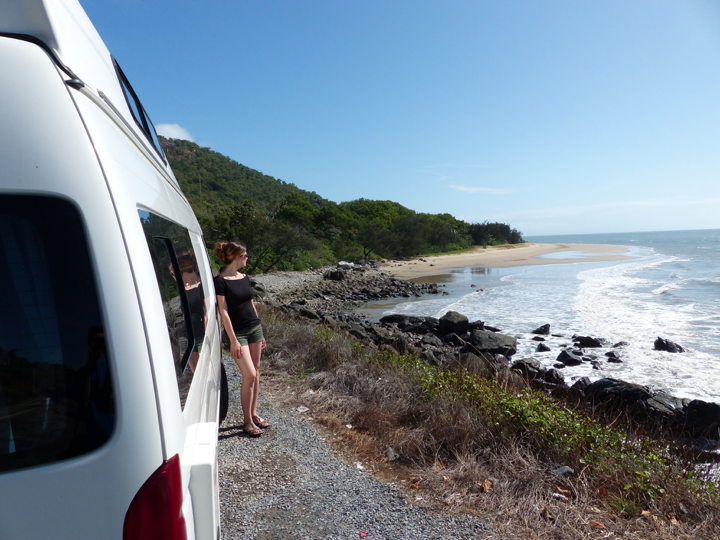 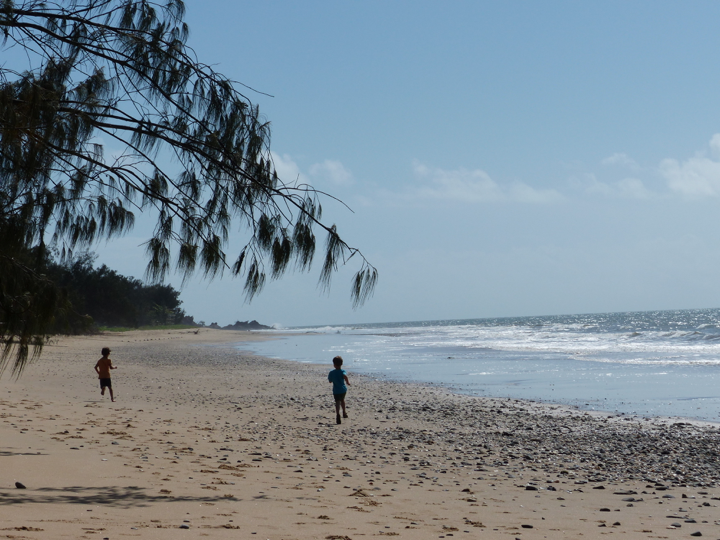 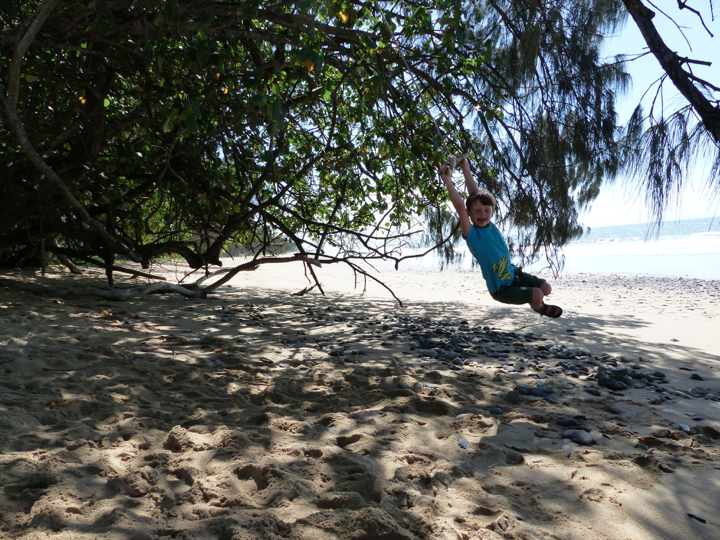 Port Douglas is a posh little beach town north of Cairns, with a beautiful long beach and lots of hotels and beach clubs. It also has a Wildlife Habitat – a sort of small zoo with native animals. We got there around noon and just across the road was a local supermarket that sold rye-bread. The boys love their rye bread and it makes them eat a whole lot more for lunch – so we ended up buying 3 kilos.

The wildlife habitat was an ok experience for a half day activity, but compared to other parks it was a bit of a disappointment in terms of the enclosures for some of the animals. A lot of the animals, however, were allowed to walk around more freely, for example the wallabies (small kangaroos) and different types of birds.

We bought some food for the kangaroos so we could hand feed them, but they were not really hungry- A few of them took the food, though, which the kids loved. 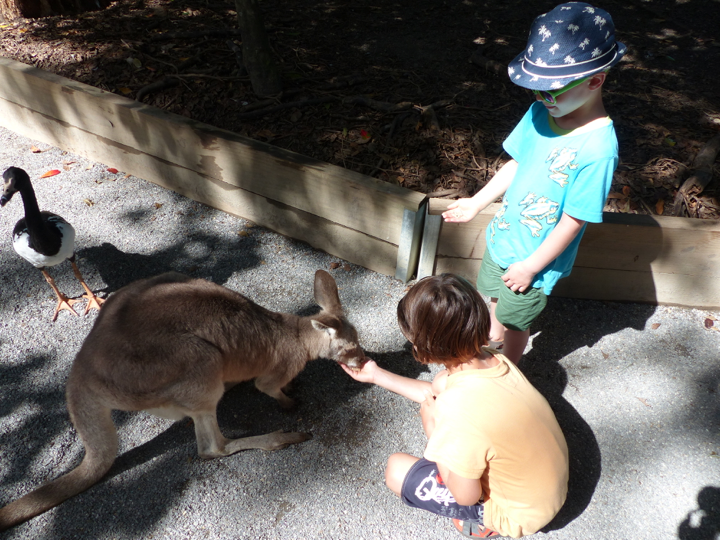 It was also possible to hold a koala, but only for 10 seconds and at a cost if 20 AUD (100 DKK) for 1 photo, so we skipped that, mostly because we felt bad for the koala for being shifted from person to person like that. All in all an OK half day experience, but not something we would want to do again even though the ticket is valid for 5 days.

We spent the last part of the afternoon at Port Douglas Beach. One of the few patrolled beaches in the area where they try to look out for approaching crocodiles (the warning signs are still there of course so it does feel a little weird sending your children in the water).

We also brought out the football and had a few games on the beach. After that we started looking for a place to camp for the night. Preferably next to the water, relatively quite, with great views and limited risk of getting caught (there are almost no places were you can legally camp for free in the area). With the help from google maps we found what looked like the perfect place. 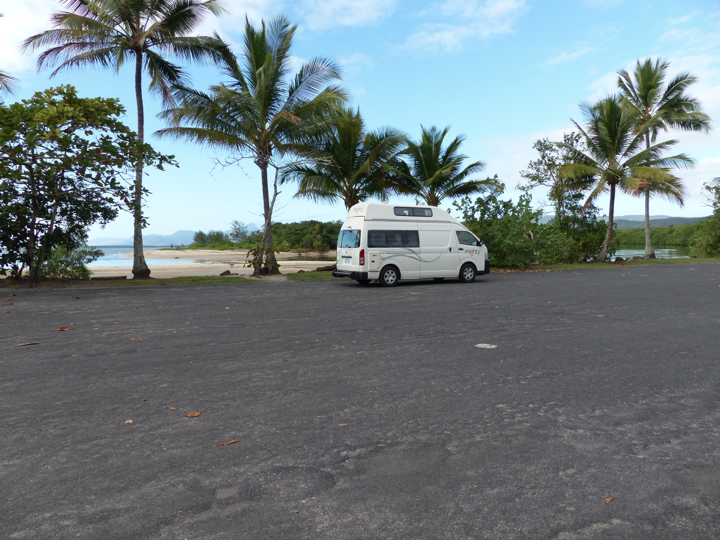 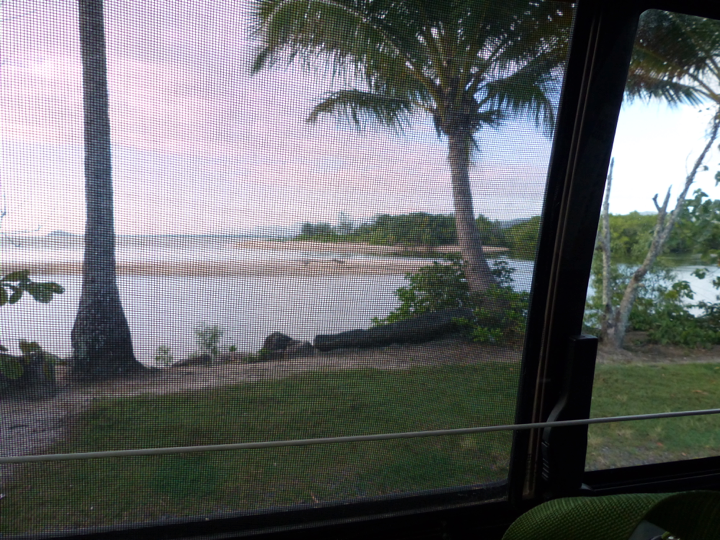 What the pictures do not show is the insane amount of mosquitos and midges (at first we thought they called them midgets – fortunately we did not ask for midget repellant 🙂 ), so we ended up eating breakfast inside the campervan, but still left with about 20 mixed bites each. As with all most other beaches/places there was a croc warning sign. So though it looked like the perfect place for a morning swim we opted out.

After surviving the mosquito/midges attack we drove north for a 1 day trip to Cape Tribulation. Though it is only a 80 km. drive it takes about two hours as the roads get very narrow winding once past the ferry crossing at Daintree River (27 $ return). Our first stop was the Alexandra lookout which is named after a Danish princess about 200 years ago. A beautiful sight and a great candidate for a new front page picture for 4globetrotters.world. 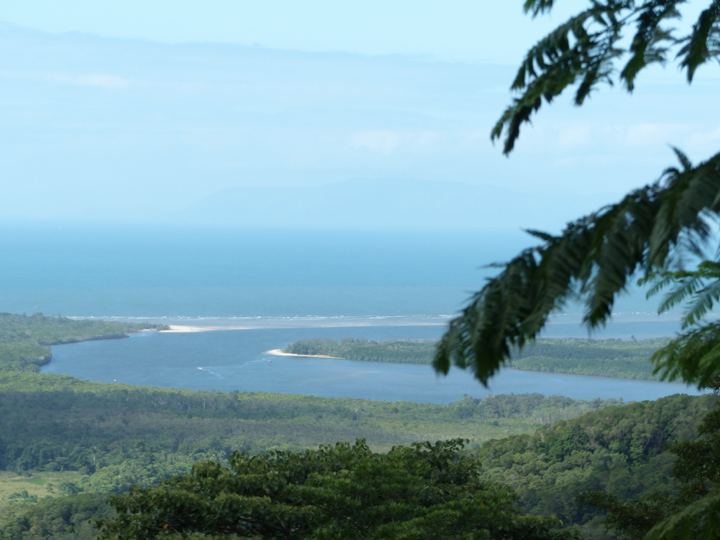 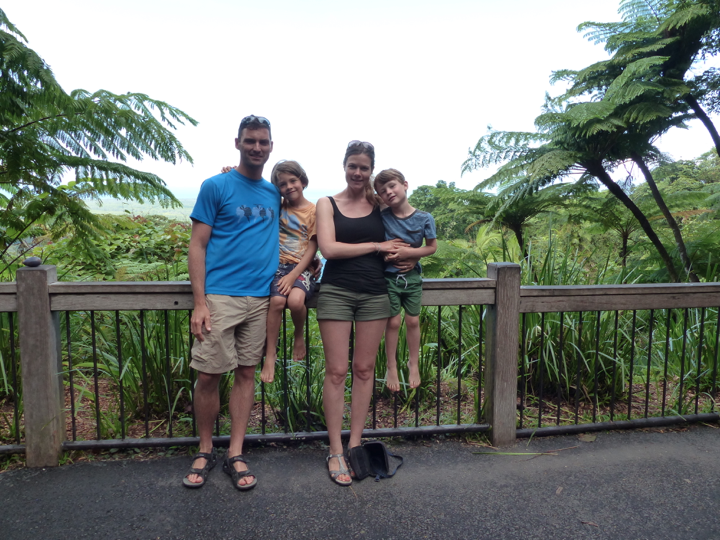 Next up was the Marrdja Botanical rainforest walk. Though boardwalks in general take away a bit of the true hiking experience they are absolutely fantastic with smaller children as you can let them loose without having to worry about them getting lost or stepping outside the tracks. The walk itself was beautiful, with lots of informative signs. 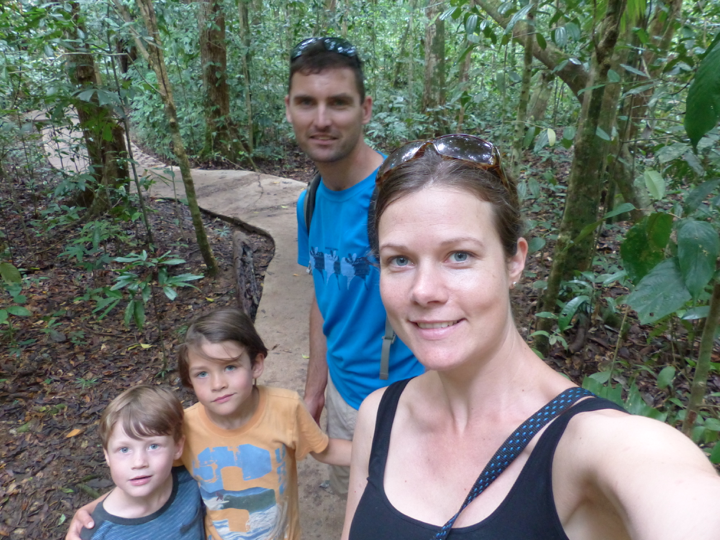 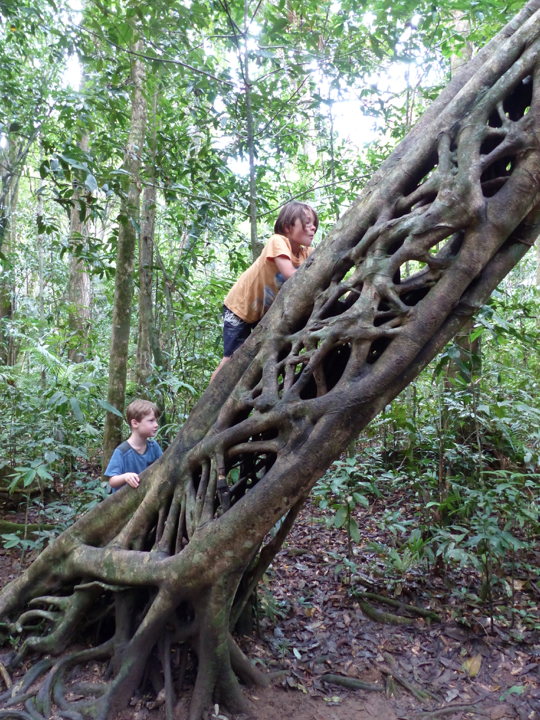 At Cape Tribulation we spent a couple of hours at the beach enjoying the view, playing football and walks along the beach. Nobody else went swimming so we did not dare either but still a nice day. 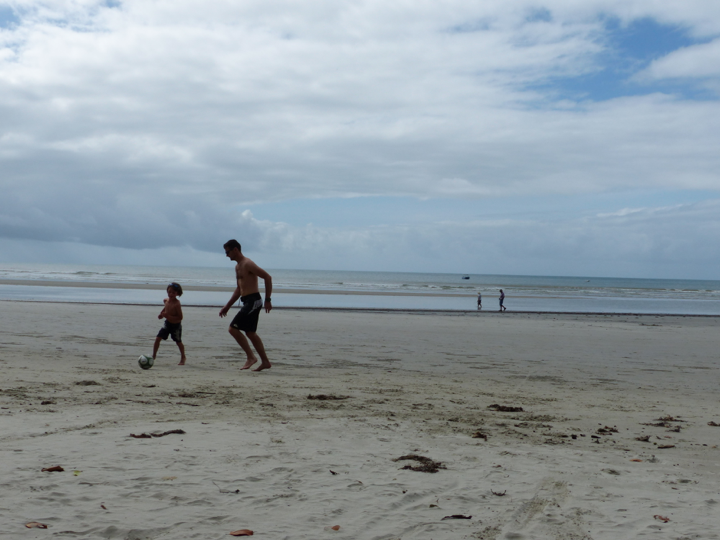 We did another rainforest walk on the way back and stopped for Organic and Biodynamic (buzzword bingo anyone?)) ice-cream at Floraville – Supposedly some of the world’s best. We suspected it was a marketing gimmick but had heard from others that it was really good so we gave it a chance. Unfortunately it was expensive but not particularly good. Ice crystals suggested they lacked the right machines and the taste was too mild for our taste. All of the better ice-cream brands you can buy in the supermarket would beat it anytime (at 1/4 the price…) 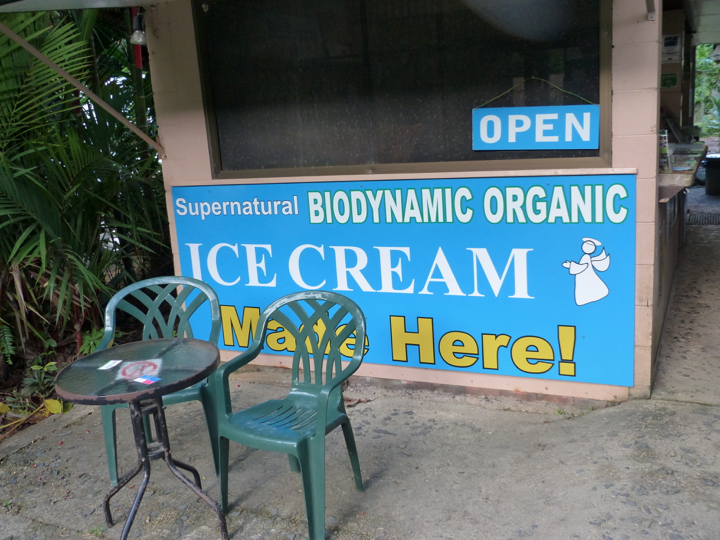 The good thing about stopping at the ice-cream shop was, however, that we got sufficiently delayed to catch one of the rare Cassowary birds (only around 1200 left in Australia) walking on to a side-road. Great to see this beautiful bird in the wild. 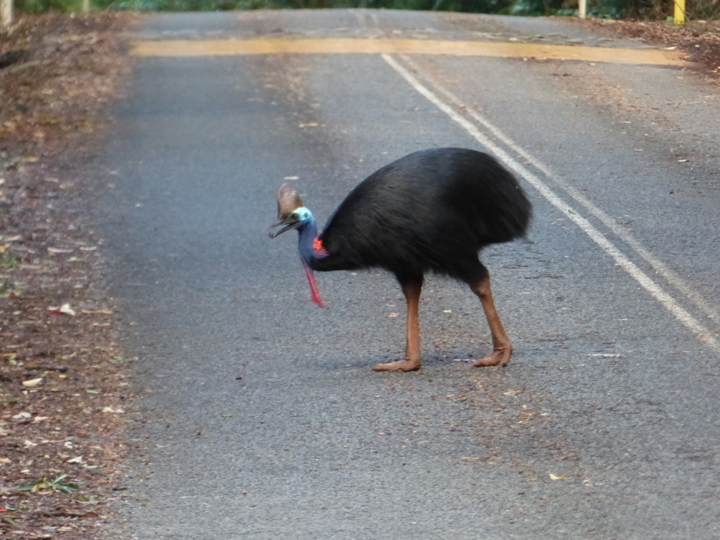 The day after we finally found a perfect place to “renegade camp”. It did say “no camping” but naturally they could not mean us since it was down a sideroad and beautifully placed at a beach – even with picnic tables to enjoy breakfast and the view 🙂 . And best of all – no mosquitos or midges. 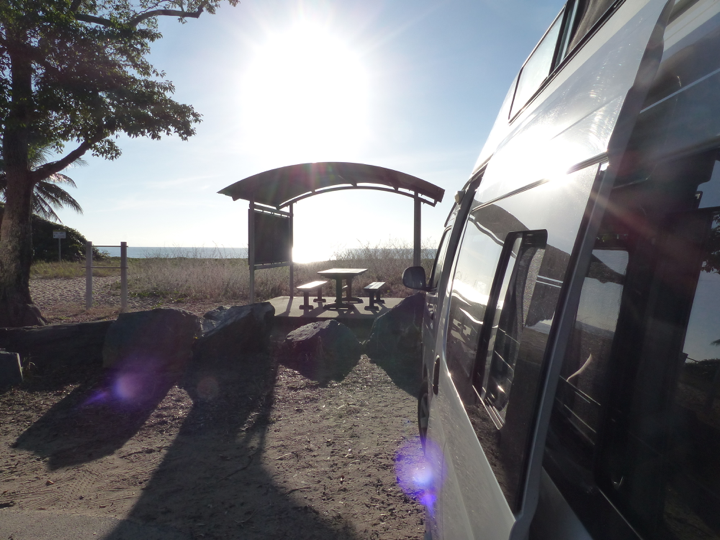 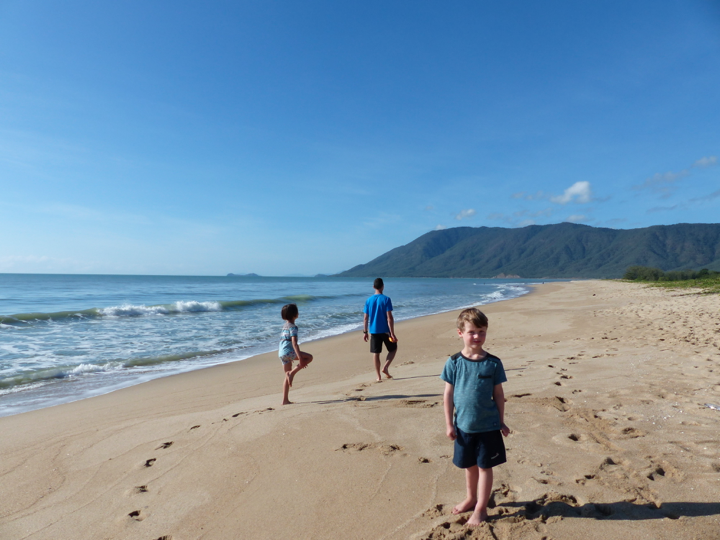 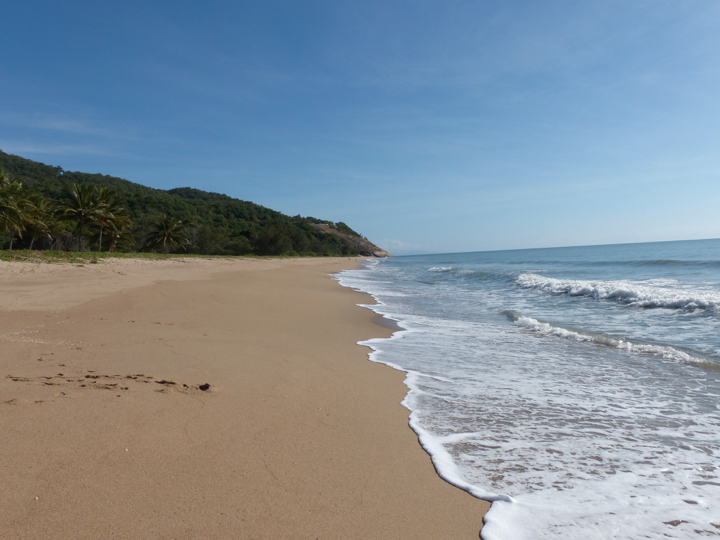