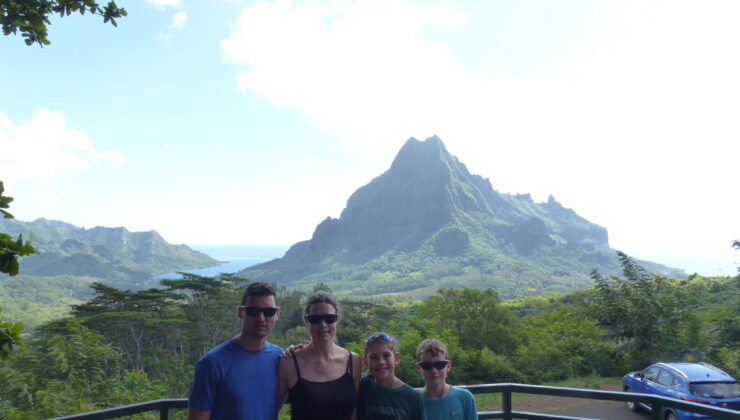 Getting to Moorea proved slightly more difficult than anticipated. We had received our vouchers when we first arrived in Tahiti which included a travel plan with ferry and flight departures. Unfortunately, the agency had forgotten that May 26th was a public holiday so our 11.30 am ferry departure was cancelled and the first ferry did not leave before 4.35 pm. Despite their obvious mistake they did not prove very helpful and their best offer was to collect our baggage from the ferry harbor and return it at 4 pm for fee of 3000 CPF (30 dollars) – fortunately the security staff at the harbor proved much more helpful and offered to let us put our bags in their office – thanks!! Borrowing a phone from friendly locals we also managed to Sunset Beach Resort on Moorea and arrange for a late arrival.

After about 200 games of UNO at the public park in Papeete we were finally ready to depart for Moorea. Arriving in Moorea we were hoping to catch the local buss around the Island which is normally coordinated with the ferry arrivals. Hurrying to the bus stop Vitus fell and hit his knee quite bad – and the bus had already left. When we finally got to Moorea Sunset Beach Resort we were all tired with no desire to go out and find a restaurant. Thus we ended up cooking whatever leftovers we had brought from Tahiti – a nice dish of two leftover sausages from breakfast, 4 eggs, ½ a tomato, a small onion a bit of ham, pasta and ketchup of course. What a day 🙂 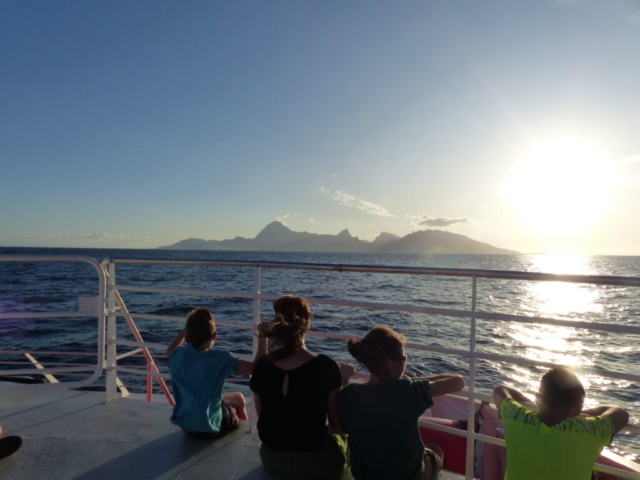 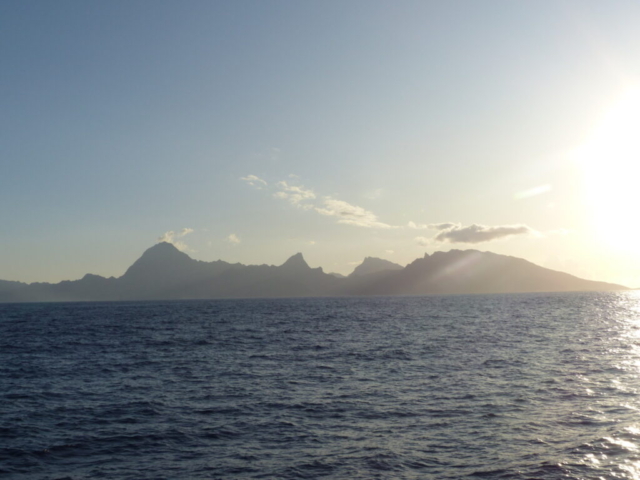 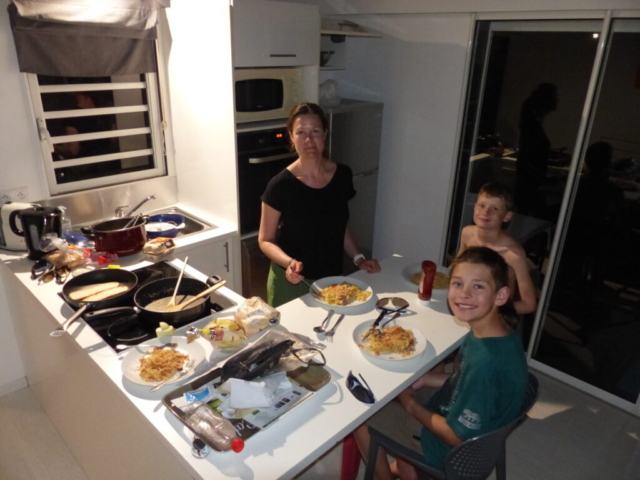 After a good night’s sleep, we woke up and headed to the beach right in front of the resort. Noah and Jesper went snorkeling to check out the reef but found limited visibility and very strong currents. Sharks Sandbank is only about 200 meters away but to get there you need to cross a narrow strait with lots of boat traffic and a 3-4 knots current. Jesper did it (dangerous – not recommended) to check out the conditions and reported lots of sharks, stingrays and the biggest fish he had seen so far.

After lunch we rented 2 kayaks and paddled over there so Line and the boys could also enjoy the views:

To get back we needed to paddle against the current and Line and Noah needed a few tries before they managed to cross the strait. They finally managed but never managed to get fully in synch 

We rented a car on Moorea for 2 days and took the chance to visit Tamae Beach which is easily one of the most beautiful beaches we have ever visited. Crystal clear turquoise water, waves breaking on the outer reef, beautiful coral 20 meters from shore and lots of trees and palm trees to provide shade on the beach. Wow! You can easily miss the turnoff for Temae beach from the main road (gravel road) but using google maps we got there without any problems and with plenty of shaded parking available. 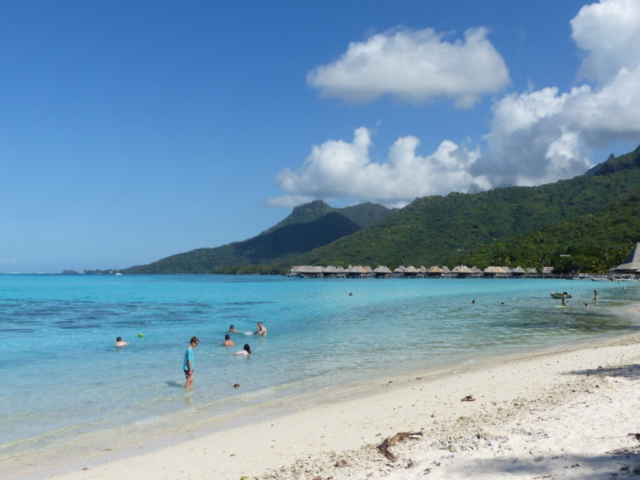 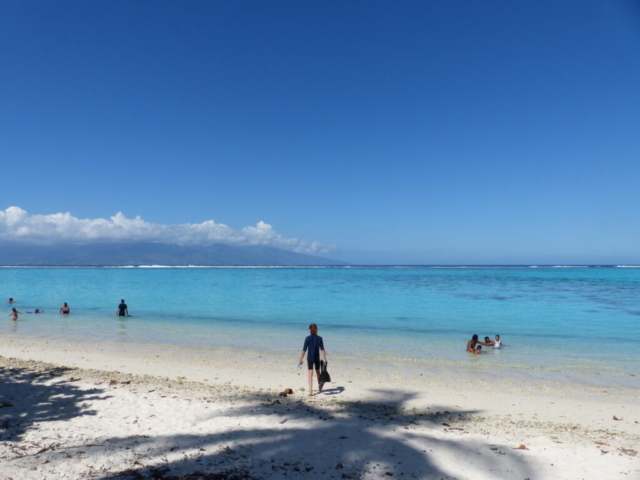 If you find things moving a bit fast in the video above it is because of the pretty strong current (seems to be the case in most places on Moorea). Actually so strong at Temae beach that you need to drift snorkel over the reef and then walk back along the beach.

We also visited the famous lookout providing views over Cook Bay and Opunohu Bay. Quite crowded but definitely worth the 10 min. drive from the mail road. We tried to hike the trails at the top (various options ranging from 2 – 5 hours) but unfortunately Line´s foot was not well so we had to turn back after about 15 min. 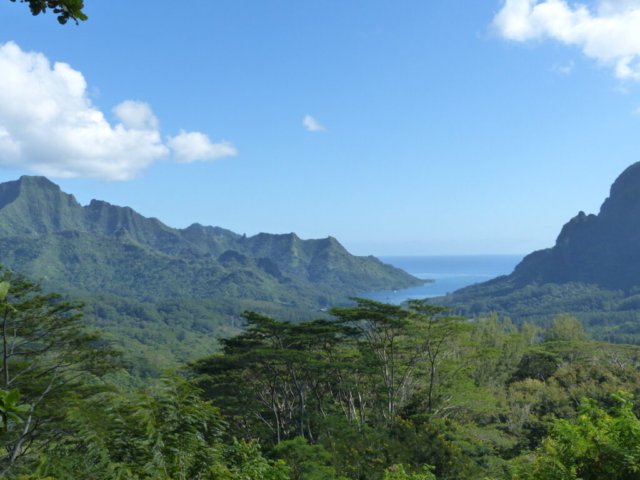 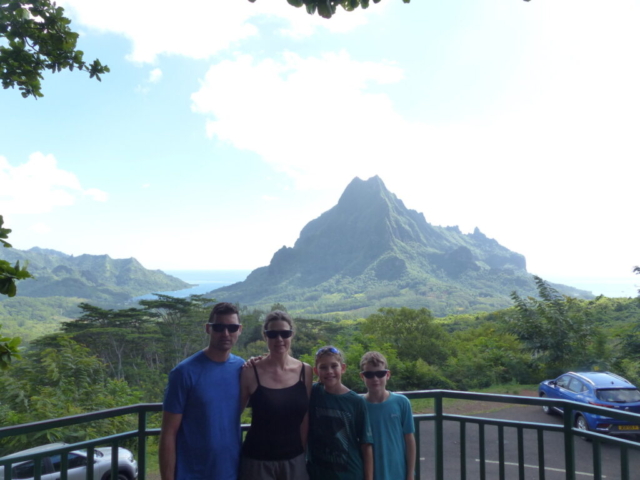 Snorkeling at the “Coral Garden” between Motu Fareone and Motu Tiahura

When the winds had calmed down we packed lunch, rented two kayaks and went to snorkel in the Coral Garden between the two motus. Apparently this should be the best place near Moorea and after a beautiful 25 minutes trip there (against the current) we jumped in from the beach. Unfortunately most of the coral had been seriously damaged and visibility was not great. A big Sting Ray resting on the sand was by far the most impressive site. Jesper went deeper into the channel and found patches of healthy coral but since it is quite shallow and you can easily get lost in the maze of corals it is not something he would recommend. To be honest the reef right in front of Sunset Beach Resort was in a better condition but due to the strong currents visibility never went beyond 5-10 meters and much less on the parts close to the beach. It was however a beautiful beach and we enjoyed lunch there. We made a 30 min. stop on Shark Sandbank on our way back and once again the boys really enjoyed the many sharks and rays there.

It turned out that Moorea Sunset Beach Resort had a Tennis court for free use. Noah and Vitus had never tried it before, but both found it to be a lot of fun and thus we ended up playing at least 2 hours per day. Since it quickly got too hot to play when the sun was up the boys would even get up at 6 O’clock in the morning to play an hour of tennis before breakfast (normally they never get up before 7 or 8) 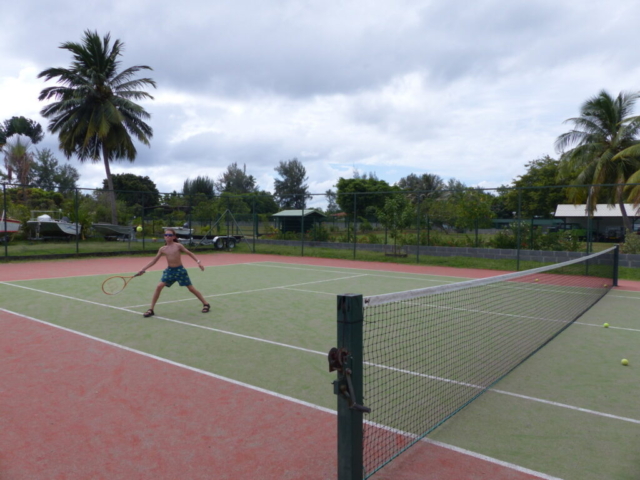 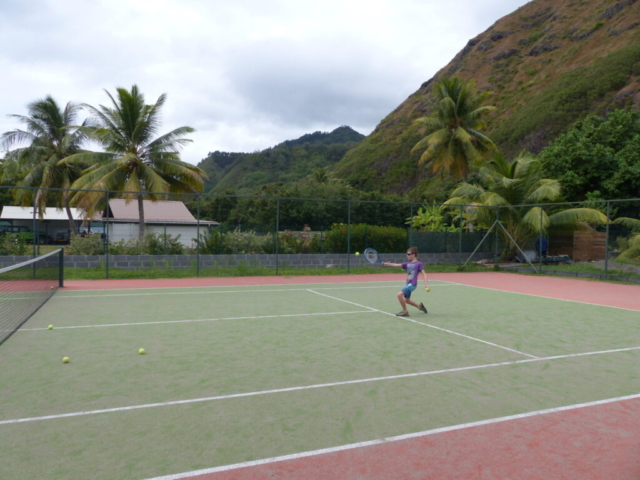 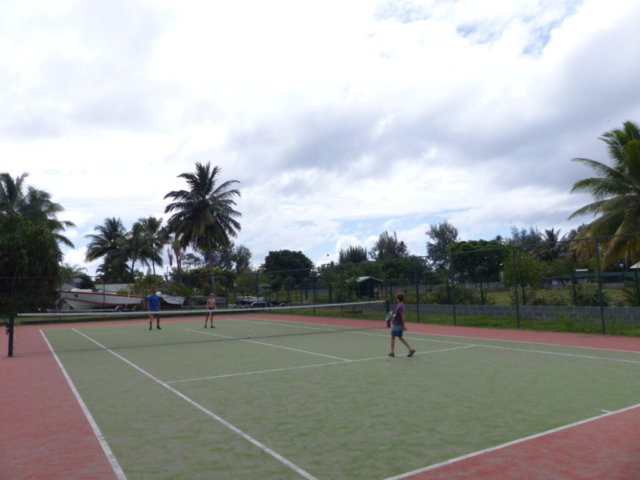 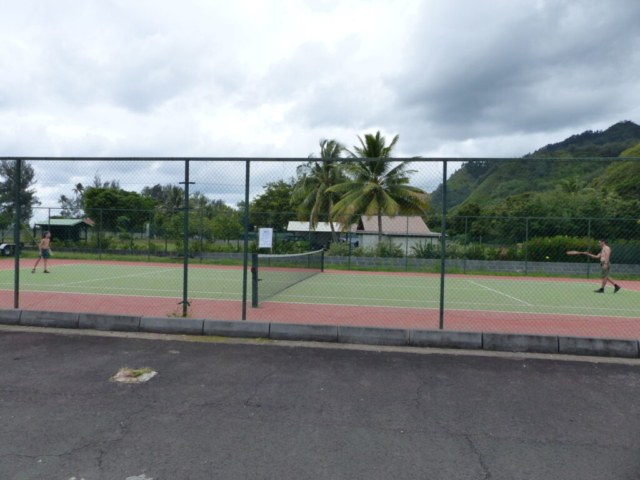 1. In general hotels, resorts and private landowners seem to be doing everything to restrict public access to the beaches in French Polynesia so except for a few public beaches you need to stay at a hotel or resort to get access to the water.

2. On Sundays people go to church and then to the beach to get really drunk, then they jump on their motorbikes or in their cars and drive home.

3. Tahiti is really expensive but Moorea adds another 10-50%  on most items in the supermarket and in the restaurants. A few examples:

Fish is still very cheap compared to other countries and you can also get frozen Entrecote from New Zealand at very reasonable prices.