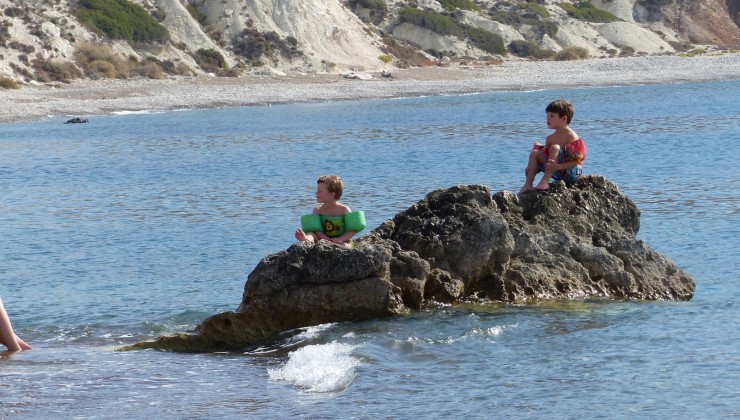 Saturday (Oct. 17.) we went to the small waterpark at King Evelthon Hotel. We considered going to the much larger Afrodite’s Waterpark but decided against it since the entrance fee would be 3 times higher and the fact that Noah and Vitus would probably not be able to go on the big slides anyway.

That turned out to be a perfect decision. The King Evelthon Hotel water park had plenty of slides a great area for smaller children and with only a few other guests there we pretty much had everything to ourselves. Also the smaller size makes it much more relaxing since you can pretty much just let the children play without worrying that they will get lost. Travelling with children is very much about looking at the goal instead of a fixed destination. 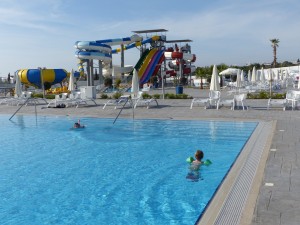 Only downside was that they would not let Noah ride the fastest slide, but he survived without crying too much J In all honesty it was fast for a 5 year old but he would surely have had a blast if they would have let him. It is the blue and yellow one shown in the picture above and a nice touch is that you end up circling around in a toilet like bowl until you loose speed and are “flushed out”.

The large pool gave Noah the chance to refresh his snorkeling and by the end of they day he was so good that he could do without his floaters as long as there were close adult supervision. We really hope that he will learn how to swim for real in the coming weeks.

For lunch we ate at our local roadside kebab Tavern – it is always nice to see the smile on the owner’s face when they get returning customers and despite the fast-food like concept food is great and everything is done with a smile. 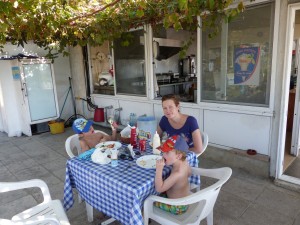 Visiting Italy this summer Vitus really liked even the bigger slides (when forced to try it the first time) but this time he was less fund of the concept. Usually he just needs to be forced to things once (kicking and screaming when getting on) and then he wants to do nothing else the rest of the day. This time however he merely got to the acceptance state and after the 3rd time on one of the bigger slides he said “That was a lot of fun dad, let’s NOT do that again” so we let him stay in the children’s area the rest of the day. 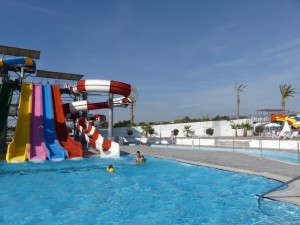 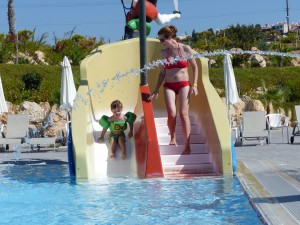 Day ended with a nice home-cooked meal after putting the Noah and Vitus to bed. We have tried to make it a tradition to eat late once a week to be able to enjoy food without having to spend most of our time and attention attending to Noah and Vitus. 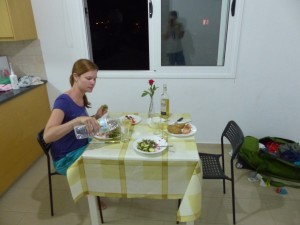 Sunday Oct. 18. we went to the Tomb of the Kings in the morning and to the beach in the afternoon. We had checked the weather forecast and it should have been and acceptable partly clouded morning with around 27 degrees Celsius and a light breeze. While 27 degrees was probably correct there was no wind at all and the sun kept shining from a clear blue sky. Walking among the tombs was really, really HOT, but still an enjoyable morning though you should not expect anything remotely similar or as impressive as the name sounds J As usual the boys were fighting to get first to anything from a sign, to a tree, tomb or a leaf on the ground and on dusty gravel paths that resulted in scratched knees and several “I told you so” from mom and dad. Not that being a bit competitive is a bad trait but with two boys doing it 24/7 it is a bit over the top. 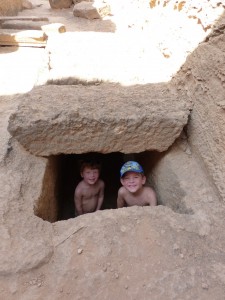 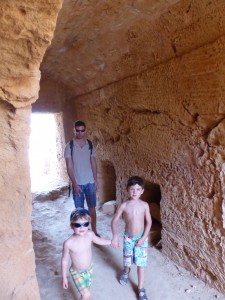 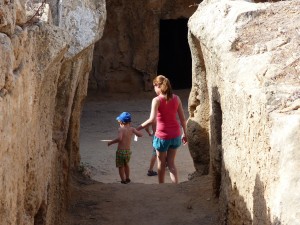 In the afternoon we went to a small local city-beach and had a perfect time. Line got the hang of snorkeling again and Noah saw his first shoal of fish. At first Jesper could not understand why he would not go any further but later it turned out that to him it was like swimming straight into a fence. A funny reminder in terms of how much we take for granted as adults – including the fact that fish move when you get close to them J Only downside was that the clouds that should have been there in the morning was starting to arrive and together with a strong breeze it was a bit chilly getting out of the water – as usual Vitus did not care. 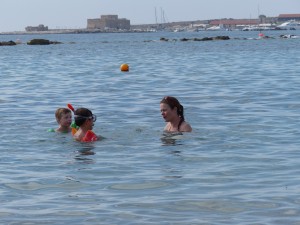 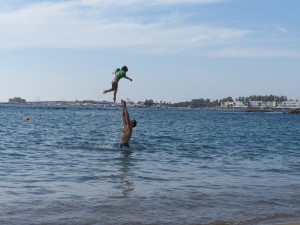 Today (Monday Oct. 19.) we went to Aphrodite’s Rock Beach (Petra tou Romiou) which was incredibly beautiful. There is a calm and almost sandy beach to the left of the rock perfect for children. We had brought lunch and ended up staying around 4,5 hours enjoying the perfect weather, reading and snorkeling. 3 big achievements were completed: 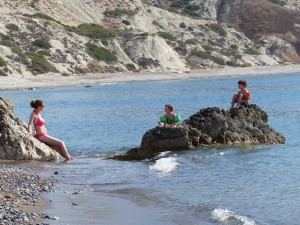 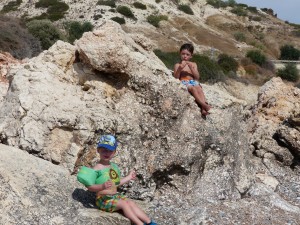 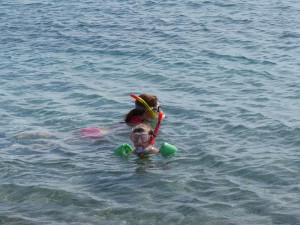 Late afternoon we spent 2 hours in the real Paphos Archeological park (turns out the one we visited earlier was another smaller site a few hundred meters away). It was impressive to see the large structures and the enormous amount of work it must have taken to create the mosaic floors. In some of the buildings you can even walk through long tunnels underneath. Unfortunately we forgot to bring a flashlight or mobile phone and since it was pitch black after a few meters we did not dare to go much further with only the flash from the camera to light the way (though under heavy pressure from Noah and Vitus to continue). 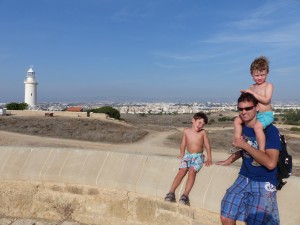 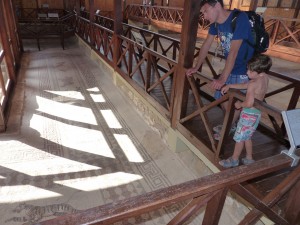 A nice experience but both Noah and Vitus found the smaller (and free) site we visited a few days ago more enjoyable.